What Country Is This? Forced Blood Draws, Cavity Searches and Colonoscopies 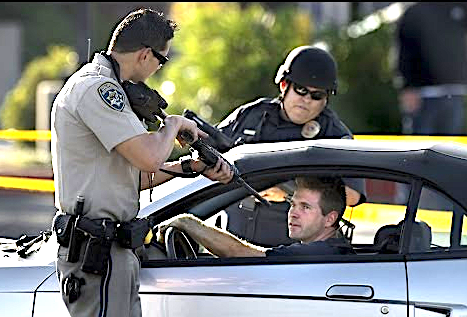 “The Fourth Amendment was designed to stand between us and arbitrary governmental authority. For all practical purposes, that shield has been shattered, leaving our liberty and personal integrity subject to the whim of every cop on the beat, trooper on the highway and jail official.”—Herman Schwartz, The Nation

By John W Whitehead: Our freedoms—especially the Fourth Amendment—are being choked out by a prevailing view among government bureaucrats that they have the right to search, seize, strip, scan, shoot, spy on, probe, pat down, taser, and arrest any individual at any time and for the slightest provocation.

Such is life in America today that Americans are being made to relinquish the most intimate details of who we are—our biological makeup, our genetic blueprints, and our biometrics (facial characteristics and structure, fingerprints, iris scans, etc.)—in order to clear the nearly insurmountable hurdle that increasingly defines life in the United States: we are now guilty until proven innocent.

Forced cavity searches, forced colonoscopies, forced blood draws, forced breath-alcohol tests, forced DNA extractions, forced eye scans, forced inclusion in biometric databases: these are just a few ways in which Americans are being forced to accept that we have no control over our bodies, our lives and our property, especially when it comes to interactions with the government.

Consider, for example, what happened to Utah nurse Alex Wubbels after a police detective demanded to take blood from a badly injured, unconscious patient without a warrant.

Wubbels refused, citing hospital policy that requires police to either have a warrant or permission from the patient in order to draw blood. The detective had neither. Irate, the detective threatened to have Wubbels arrested if she didn’t comply. Backed up by her supervisors, Wubbels respectfully stood her ground only to be roughly grabbed, shoved out of the hospital, handcuffed and forced into an unmarked car while hospital police looked on and failed to intervene (take a look at the police body camera footage, which has gone viral, and see for yourself).

Michael Chorosky didn’t have an advocate like Wubbels to stand guard over his Fourth Amendment rights. Chorosky was surrounded by police, strapped to a gurney and then had his blood forcibly drawn after refusing to submit to a breathalyzer test. “What country is this? What country is this?” cried Chorosky during the forced blood draw.

What country is this indeed?

Unfortunately, forced blood draws are just the tip of the iceberg when it comes to the indignities and abuses being heaped on Americans in the so-called name of “national security.”

Forced cavity searches, forced colonoscopies and forced roadside strip searches are also becoming par for the course in an age in which police are taught to have no respect for the citizenry’s bodily integrity whether or not a person has done anything wrong.

For example, 21-year-old Charnesia Corley was allegedly being pulled over by Texas police in 2015 for “rolling” through a stop sign. Claiming they smelled marijuana, police handcuffed Corley, forced her to strip off her pants, threw her to the ground, forced her legs apart and then probed her vagina. The cavity search lasted 11 minutes. This practice is referred to as “rape by cop.”

During a routine traffic stop, Leila Tarantino was subjected to two roadside strip searches in plain view of passing traffic, while her two children—ages 1 and 4—waited inside her car. During the second strip search, presumably in an effort to ferret out drugs, a female officer “forcibly removed” a tampon from Tarantino. No contraband or anything illegal was found.

Thirty-eight-year-old Angel Dobbs and her 24-year-old niece, Ashley, were pulled over by a Texas state trooper on July 13, 2012, allegedly for flicking cigarette butts out of the car window. Insisting that he smelled marijuana, the trooper proceeded to interrogate them and search the car. Despite the fact that both women denied smoking or possessing any marijuana, the police officer then called in a female trooper, who carried out a roadside cavity search, sticking her fingers into the older woman’s anus and vagina, then performing the same procedure on the younger woman, wearing the same pair of gloves. No marijuana was found.

It’s gotten so bad that you don’t even have to be suspected of possessing drugs to be subjected to a strip search.

Thanks to the U.S. Supreme Court’s ruling in Florence v. Burlison, any person who is arrested and processed at a jail house, regardless of the severity of his or her offense (i.e., they can be guilty of nothing more than a minor traffic offense), can be subjected to a strip search by police or jail officials without reasonable suspicion that the arrestee is carrying a weapon or contraband.

America’s founders could scarcely have imagined a world in which we needed protection against widespread government breaches of our privacy, including on a cellular level.

Yet that’s exactly what we so desperately need.

Unfortunately, as I make clear in my book Battlefield America: The War on the American People, the indignities being heaped upon us by the architects and agents of the American police state—whether or not we’ve done anything wrong—are just a foretaste of what is to come.