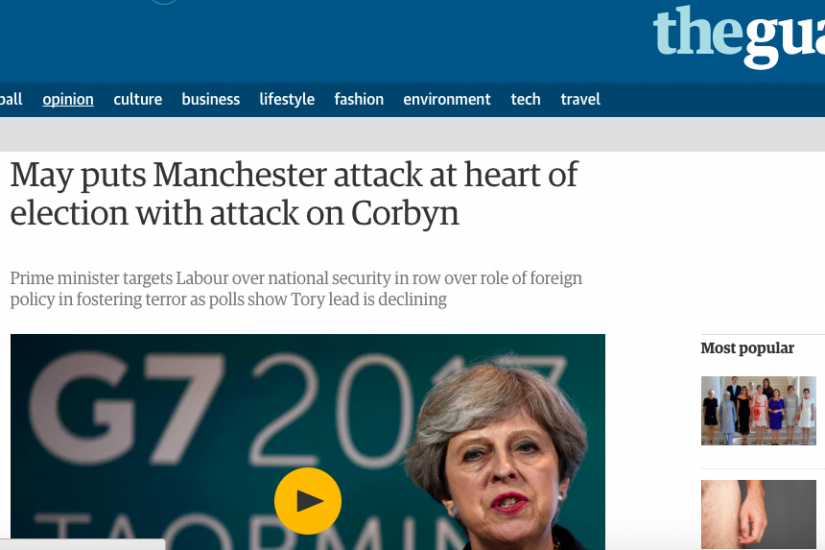 It is quite extraordinary to read today’s coverage in Britain’s supposedly left-liberal newspaper the Guardian. In the “man bites dog” stakes, the day’s biggest story is the astounding turn-around in the polls two weeks before the British general election. Labour leader Jeremy Corbyn has narrowed the Conservatives’ lead from an unassailable 22 points to 5, according to the latest YouGov survey. It looks possible for the first time, if the trend continues, that Corbyn could even win the popular poll. (Securing a majority of the British parliament’s seats is a different matter, given the UK’s inherently undemocratic electoral system.)

Is the news that the “unelectable” Corbyn has dramatically closed the gap with the Tories front page news for the Guardian? Well, only very tangentially. It is buried in the paper’s lead story, which is far more interested in issues other than the new poll finding.

The story – headlined “May puts Manchester bombing at heart of election with attack on Corbyn” – largely adopts Conservative leader Theresa May’s line of attack against Corbyn for his suggestion that there might be a link between long-term western violence in the Middle East (now usually referred to as “intervention”) and terror attacks like the one in Manchester last week. Labour’s dramatic rise in the polls is briefly mentioned 12 – yes, 12! – paragraphs into the story. It is almost as though the Guardian does not want you to know that Corbyn and his policies are proving far more successful in the election campaign than the Guardian predicted or ever wanted.

In fact, the Guardian’s only story on the poll – buried deep on the inside pages – could not be less enamoured with the polling turn-around. The story – headlined “Labour poll rise suggests Manchester attack has not boosted Tories” – is again framed as a story about Conservative failure rather than the draw of Corbyn and his policies. Here is as excited as the Guardian can get about the Tories’ highly diminished 5-point lead:

It was always going to be the case that the polls would narrow during the course of the campaign, as Labour’s policies received greater media exposure, but the YouGov poll implies that public opinion is more volatile.

It sounds almost as though the Guardian, which has been denigrating Corbyn since his election as Labour leader nearly two years ago (along with the rest of the British media), does not want him to win. Let’s put that another way. It’s almost as though Britain’s only supposedly left-liberal newspaper would prefer that May and the Conservatives won. This, let us remind ourselves, is the same Conservative party that has made the once-surging, far-right UKIP party largely redundant by adopting many of its ugliest policies.

But the Guardian has a chance finally to redeem itself in its editorial, entitled “There’s a message in the poll wobble“. Surely now it will celebrate the polling success of the underdog social democratic candidate for prime minister, Jeremy Corbyn, with his policies for a fairer, kinder Britain.

Oh, but wait. There is barely a mention of Labour’s poll surge here either. In fact, the Tories’ drop to a 5-point lead is not actually mentioned in the text. Instead, the story is once again farmed in terms of May’s hubris and “complacency”, rather than Corbyn’s success. The illustrative picture is even a close-up of May, not Corbyn. The Guardian editors’ optimism-crushing view for the left is:

Mrs May’s supremacy at the start of the campaign will not be easily overturned. Polling volatility should not be over-interpreted.

In fact, the editorial is far more interested in ignoring the poll and using it as a pretext to offer an often thinly veiled attack on Corbyn over the very policies now proving so attractive: for being “selective about the jihadi narratives” in explaining the Manchester attack; and for putting forward domestic policies whose “viability … might be open to debate and their arithmetic can be questioned”.

The editorial’s conclusion reveals where the Guardian really stands:

[May] presumes her credentials to do the top job speak for themselves. But she does not have a long record of achievement to justify that confidence. The Tories have gambled everything on the effectiveness of their messenger. They need a more substantial message.

Does it not sound here very much as if the Guardian’s top priority is that May become a better candidate, that she produce policies more effective at keeping Corbyn at bay? That the Guardian would prefer that Corbyn, rather than May, loses?

None of this would matter if we had a really democratic and pluralistic media. But we don’t. The Guardian is the only media outlet that should, according to its claimed ideology, support Corbyn. And yet it appears to be quietly aghast at the very thought.

If there is one thing to be gained from this election, it is the spotlight that has been shone on the parlous state of the corporate British media. Even the Guardian cannot hide where its true sympathies, and interests, lie.

Jonathan Cook is an award-winning British journalist based in Nazareth, Israel, since 2001. In 2011 Jonathan was awarded the Martha Gellhorn Special Prize for Journalism. The judges’ citation reads: “Jonathan Cook’s work on Palestine and Israel, especially his de-coding of official propaganda and his outstanding analysis of events often obfuscated in the mainstream, has made him one of the reliable truth-tellers in the Middle East.”