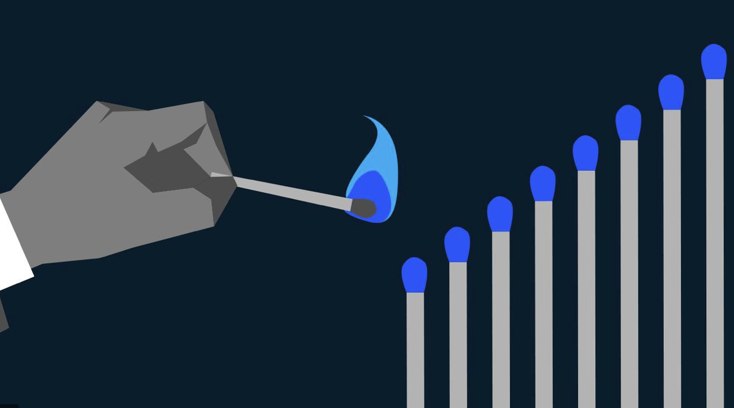 By TruePublica: In chaos theory, the ‘butterfly effect’ is the sensitive dependence on initial conditions in which a small change in one state of a deterministic nonlinear system can result in large differences in a later state. In other words, a small change in starting conditions can lead to vastly different outcomes. Brexit is a perfect example.

Chaos theory is something that Dominic Cummings subscribes to when it comes to effecting change. He believed, as did his acolytes (including people such as Boris Johnson), that the only way to effect real change really quickly is through chaos. This is because the argument doesn’t stack up and convincing people takes too long.

In 2012, the Daily Mail moved its Brexit campaign gear up a few notches. “Bring on the Brixit” it proclaimed and Tory MP John Baron said – “There is a consistent majority in this country who believe that the European Union meddles too much in our everyday lives.” This was a time when EU membership did not even register in the minds of the electorate in the top issues facing the country. Then a PM in a coalition, desperate for a majority uttered the words – “It is time for the British people to have their say. It is time for us to settle this question about Britain and Europe.”

No-one thought much of it at the time. No-one thought the UK would actually vote to leave the European Union. However, little did people realise – the ‘butterfly effect’ was now in motion. From the manifesto promise of a referendum came the misinformation, disinformation, then the lies and propaganda. By 2016, these lies went into overdrive online – billions of micro-ads were targeted with great precision and effect, with dark money funding illegal campaigns.

The Project for the New American Century was a neoconservative think tank based in Washington, D.C. that focused on United States foreign policy. Its goal was to promote American global leadership. Of the twenty-five people who signed PNAC’s founding statement of principles, ten went on to serve in the administration of U.S. President George W. Bush, including Dick Cheney, Donald Rumsfeld, and Paul Wolfowitz. It called for regime change in Iraq and ultimately led to the deaths of millions of innocent people across the Middle East. In the end, it also led the American electorate to become tired of its aggressive foreign ventures that saw body bags and national debt escalate out of control. It ultimately caused the election of Donald Trump after the abject failure of Obama to achieve the change that was promised.

Like the PNAC, the principles of Brittania Unchained had no foundation in evidence or science but by ideology. Its guiding principle was that “Britain should adopt a different and radical approach to business and economics or risk an inevitable slide into mediocrity.” It says the UK should “stop indulging in irrelevant debates about sharing the pie between manufacturing and services, the north and the south, women and men” and stop being “among the worst idlers in the world“. In truth, Brexit was code for MAGA and MAGA failed.

It was somehow of no concern to the authors of Brittania Unchained that Britain has a landmass that ranks it 80th in global terms, 21st in population size and yet 5th in GDP (having just overtaken India during the pandemic). To move up just one place from this level of ‘mediocrity’ as they put it – Britain would need to increase its annual GDP output by almost 40 per cent to match that of Germany. To do that, Britain’s population would need to increase by almost 20 million and manufacturing to double. And yet – it was an anti-immigrant sentiment that was a central pillar of the Brexit campaign. It is simply not possible to increase economic output this much in the highly competitive world of the 21st century without some sort of divine intervention.

It took two decades for PNAC’s guiding principles to disintegrate. In the end, its ideology accelerated the fall of the Republican party to where it is today. The ideology of Brexit is already falling apart in just a matter of weeks, let alone years.

The cratering of industries like fashion, fishing and farming is just the start of a self-induced economic spiral. The music and entertainment industry has crashed almost overnight. The ‘financial services’ industry in the City of London has moved £1.2trillion of assets to the EU. Numerous companies like Panasonic, P&O, Sony, AXA and Michelin are just a few of the many household named businesses that have moved or are currently moving to the EU. Just as February got underway, we hear exports to the EU have crashed 68 per cent. Much of that fall will be Covid related, some due to difficulties which will smooth out at the ports – but a hefty chunk is related to Brexit red-tape and additional duties. It is a deadly blow to British exporters. It is a moment of truth. No matter the rhetoric – evidence says Brexit is not as promised.

Since the 2016 referendum, economic activity has fallen in Britain by £200bn – about £50bn per year. The government’s own analysis forecasts that a no-deal Brexit would reduce UK GDP by 7.6% after 15 years, while reaching a free trade agreement (FTA) with the EU would lead to a 4.9% decline. We actually got both – a thin-deal, hard Brexit. Most respected analysts now put the fall in GDP to Britain as a result of Brexit at around 5 per cent per year for the next 10 to 15 years. Make no mistake what this means. This was almost the cost of the 2008/9 financial crisis that did so much damage to civil society over the course of a decade. Arguably, you might conclude that that event led to a high degree of public dissatisfaction – that itself led to Brexit.

If that level of decline continues, which it predicted – what then?

Consider the Suez crisis that saw Britain internationally isolated and the US Dollar replace the Pound Sterling as the world’s reserve currency. It was a massive political miscalculation by the Tories.

Consider the Poll Tax. The Thatcher governments blunder was widely foreseen. Lawson, Heseltine and Patten – and many others warned against it. It led to massive non-compliance, thousands of prosecutions, rioting on the streets and contributed heavily to the fall of Thatcher. It was a political miscalculation.

Then there was Britain’s exit from the Exchange Rate Mechanism (ERM). Joining it was a mistake. It also turned out to have profoundly negative consequences for not just the economy but also the Tory government.

These three examples of many only go to show that people in power do not really know what they are doing – they are speculating.

Milton Freidman once said that – “The Great Depression was not a sign of the failure of monetary policy or a result of the failure of the market system as was widely interpreted. It was instead a consequence of a very serious government failure, in particular a failure in the monetary authorities to do what they’d initially been set up to do.” That government failure caused 25 per cent unemployment, the depression lasted a decade, millions lost everything. It is widely accepted today that the Great Depression was caused by political miscalculation and speculation.

One of the authors of Britannia Unchained once said – “I’m proud to say like many of my colleagues in the Conservative Party I am fully behind Theresa May’s Brexit plans.” That was Liz Truss. May was kicked out as PM as her Brexit plans were not acceptable. It just goes to show that they are speculating.

Brexit will go down in British history as one of those miscalculations driven by speculation. It is just another blow in a series of blows delivered by the weakening of the political gene pool. That weakening has come about through donors, political lobbying, dark money, and an archaic electoral system no longer fit for purpose.

When Covid no longer dominates the headlines, Brexit will take centre stage as the economy suffers and unemployment rises, which will manifest itself in rising crime, poverty, homelessness and falling living standards.

Politicians take credit for things they didn’t do and avoid accountability for the things they mess up. They rarely face the consequences of their failures and Brexit will be no different.