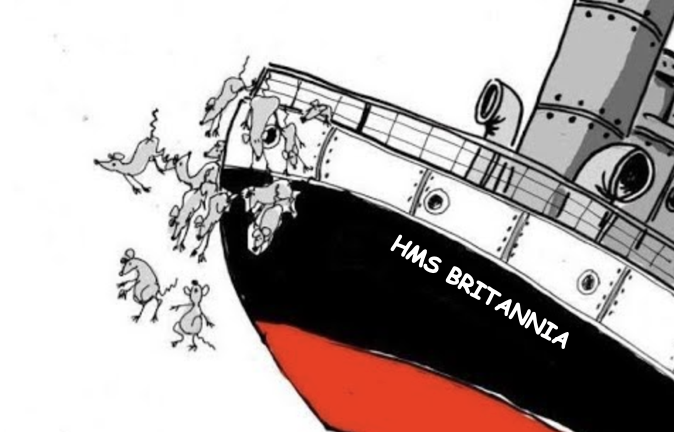 TruePublica Editor: Since 2015, I made and wrote about a number of predictions. One was that David Cameron would lose the EU referendum and be kicked out of office. Another was that after Theresa May was handed the role of PM, she would also be kicked out and that a third would lead to a fourth by which time the Tories would implode as a ‘one nation’ party of Conservatives and have to reinvent themselves for the  2024 election. To be fair, I never saw Boris Johnson becoming PM. Last January, just a few months after Joe Biden was picked as the Democrat nominee to fight Trump, I predicted Biden would win and that any hope of a US/UK trade deal would crater.

I also predicted that ‘global Britain’ would be seriously diminished and it has been (source). I also said all along that the right-wing faction of the Tory party, the Jihadists of Brexit – would jump ship as the propaganda and lies were replaced with reality. That reality is gaining now momentum.

Throughout all of this, I predicted that Brexit would prove to be a disaster and that in the end a deal with the EU would have to be signed as the political fallout of not doing so would be truly awful for Britain. I still think a deal will be signed. But who knows.

Pollsters now publish research that says Brexit would only be supported by around 39 per cent of voters (source). The undecided have shifted. Back in 2016 – just four weeks before the referendum, one-third of voters were unsure whether to vote to leave or remain – today that number has fallen to 12 per cent (source).

The reality of Brexit is this. Right now there is no-deal with just six weeks to go to the end of the year. Chaos is the only thing that beckons. Businesses have no idea what Brexit is and haven’t prepared for it. It doesn’t help that they are still in Covid survival mode or that government has mishandled that for them as well. Our borders are not just unprepared, they are already failing to cope with a Brexit that hasn’t actually arrived. Logistics experts call post-Brexit plans an utter “shambles”, and we are now reading daily about thousands of traffic-stuck lorry drivers that will turn Kent – the garden of England into “the toilet of England”. One 60 acre Kent lorry park, is not finished or ready for Brexit and is currently submerged under water as they decided a flood plain would be the perfect place to put it. The irony is too embarrassing to laugh at.

As the reality of Brexit heads menacingly towards us, the rats have jumped or are jumping ship. To be fair, many that didn’t want Brexit have also jumped.

It makes no matter which way to look at it – the antics of Dominic Cummings and his sidekick Lee Cain – the architects of the Brexit propaganda machine – have gone. Call it what you like, argue about why – they’ve gone and good riddance. But it does highlight more than anything the incompetence of the person who employed them in the first place.

Ben Harris-Quinney, chairman of the Brexit backing Bow Group, said: “Dom Cummings’ presence at the centre of the government’s policy programme gave Brexiteers confidence that Brexit would take place in a meaningful way.” Harris-Quinney went on to say – “People voted for Brexit because they wanted to see immigration fall radically, they wanted more control over their lives and less adherence to liberal metropolitan values.” All of those things were in Britain’s control anyway and in Tory control – and we didn’t need to leave the EU to achieve it. But what Harris-Quinney is really looking for is the scape-goat and now that the psycho-Dom has left, it’s all Johnson’s fault. Farage is mirroring this same position and says now that Dom has gone – Brexit will be a sellout. Farage tweeted – “Seeing him leave Number 10 carrying a cardboard box tells me a Brexit sell-out is close.” Again, he looking for the scapegoat because it’s failure is nothing to do with him, is it?

The more well-known ship jumpers, such as James Dyson who moved from Wiltshire to Singapore, so Dyson is no longer a British company are also gathering speed for lift-off. Farage’s kids now have German passports and he even attempted to get one himself before being spotted queuing at the German embassy and forced into denying it. Both Jacob Rees-Mogg and John Redwood have personal business interests that advise clients to pull their money out of Brexit Britain (source). Rees-Mogg has hedged his bets by saying Brexit may not benefit the country for fifty years – so screw the prospects of your kids and grandkids.

Another Brexiteer ship-jumper was Nigel Lawson – the former chancellor who blew up the housing market back in the 1980s. His preferred place of permanent residence is France. Andy Wigmore, who helped run Leave.EU alongside Arron Banks will be taking advantage of his Belize citizenship by leaving the UK for the small tropical nation because it’s getting a bit economically chilly in old Blighty.

The list of companies, that were located in Britain that have jumped ship or moving operations to save themselves from Brexit is long. It includes Honda, Ford, Barclays, Lloyds of London, some of HSBC’s subsidiaries, Panasonic, P&O Group, Sony, Axa, UBS, Schaeffler, Moneygram, Nissan, Bodyshop and Michelin to name just a few (source). The financial services sector alone has moved over one trillion (yes Trillion) of client financial assets to Europe.

What I think will happen is irrelevant now – deal or no deal. Both are now bad deals. The Internal Markets Bill shows that whatever happens, Brexit will be negotiated in bad faith and will ultimately fail us all. And the squabbling won’t stop – the blame game will continue, the division will not abate and the ship-jumpers will keep jumping until they can see a reason not to, which will be years away.

And as I wrote over two years ago at TruePublica – “This old Tory “establishment” of hardened Brexiteers are the enemies within. They are little more than political anarchists. According to the government’s own figures, the type of Brexit these people advocate will see a recession of between 2 and 8 per cent. The former is representative of most post-war recessions, the latter would be catastrophic.” Since then, the government has re-forecasted and said the Brexit related recession will be at least 6 per cent – the equivalent of the bank-led financial crisis that led to the catastrophically failed austerity policy that killed over 120,000 people and reduced the standard of living of half the households in the country.

The Times, not known for being a left-wing anti-Brexit newspaper has an opinion on the reality of it all.  Last weekend, it wrote in an opinion piece entitled: ‘Brexiteers Vanish As Brexit Dawn Looms’ – “So here we have the dull thud of rock-bottom expectations being met. The Vote Leave advisers who treated truth — and the voters — with such disdain are disappearing. Soon pro-Brexit politicians will start blaming Covid for any post-Brexit woes; the politicians who weren’t involved will blame those in power; the rich who funded Vote Leave get richer with clever bet-against-Britain financial dealing. It might come as little surprise that those who broke it won’t own it.”

But we should not forget who owns Brexit. David Cameron, Boris Johnson, Michael Gove, Iain Duncan-Smith, Michael Spicer, Dominic Cummings, Douglas Carswell, Mark Francois, David Davis, Liam Fox, Suella Braverman and Steve Baker are just some of the high-profile public figures who own Brexit. The Tory party own it. The ERG own it. Think tanks like the IEA own it. The fake front charities and free-market fundamentalists connected to American corporations own it. They will all look to blame others for Brexit’s failure to deliver ‘sunny uplands’ and will never admit their own self-serving reasons for backing it to the point of pushing Britain into insignificance. This is why Boris Johnson will be kicked out of No10 – he’s just another scape-goat.

And just like the suits in the City of London – who crashed the economy and then robbed the nation of £750billion – the architects of this gamble, won’t own it. Rishi Sunak is briefing the papers for public reaction on what huge taxes he can get away with to pay for the pandemic. No mention of grabbing back any money from the banks that the taxpayers saved from oblivion, or the offshorers (like himself), or corporations who make big money in Britain but don’t want to pay their taxes.  There’s talk of taxing the profits on your home or buy-to-let as a British citizen but not if you’re a Russian oligarch, a corrupt Chinese official or a warmongering psycho gun-runner from Africa or Asia that’s hoovered up thousands of city properties with laundered cash. There’s talk of raiding your pension pots after a lifetime of work and saving but not of grabbing back taxpayers cash from the corporate raiders of the pandemic pot. There’s no utterance of taking back money from the fake companies of Tory donors awarded huge Covid contracts that didn’t deliver.

The next big lie will be the sound of Boris Johnson attempting to save his political life.  He’ll start ranting on about being an environmental champion without telling you his policy advisors were the fossil fuel producers (source). He’ll attempt to sell the great ‘levelling-up’ of the North – just like George Osborne’s failed ‘Northern Powerhouse’ project. He’ll attempt to bind us all together by stopping the cultures wars that got him into power – just like David Cameron’s failed ‘Big Society’ project that eventually got wound up amid accusations of financial misconduct.

What you are going to be hearing a lot of next is the sound of more propaganda, of more slogans, of more excuses and of a new dawn – if only you believe it. Don’t believe it – it’s bullshit – just like Brexit and all the other nonsense programmes of failures such as Universal Credit, HS2, third runways, fake ferry companies, privatisation ripoffs such as water, rail, mail and so on.

This is what the cliff-edge looks like and the Tory party brought us here. We’ve arrived.