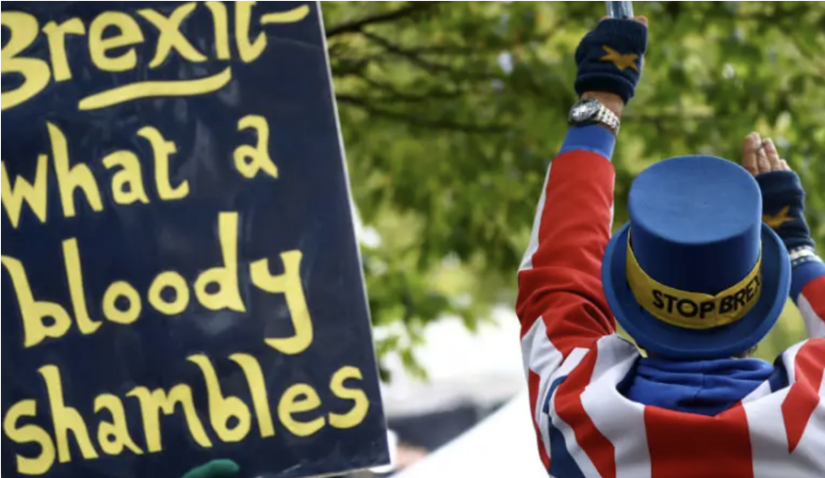 By TruePublica Editor: Boris Johnson signed a Brexit trade deal with the European Union one year ago understanding very little of it. The pandemic has, so far, provided cover but as the month’s pass, the cost of Brexit is slowly clearing from the fog. And that cost is not just about lost trade, it’s about lost growth over the next decade or so. Lower growth doesn’t just mean lower revenue to the treasury, which is bad for the social fabric of the country but it also means falling behind international competitors in a rapidly changing world.

Brexit has been very damaging to UK exporters. It is the polar opposite of what ‘global Britain’ was supposed to represent. Hugely increased red tape was one thing but Brexit saw European talent, both skilled and semi-skilled leave in large numbers, which UK business relied upon.

A year ago, Boris Johnson promoted himself as the man who got Brexit done and that Britain had finally taken back control. From there, it’s been a disaster. So much so that most voters would now rejoin the EU, according to various polls recently published.

Lord Frost’s departure as the man who negotiated this departure is telling. He is the third Brexit minister to walk away from the job. That role is now seen as a political graveyard. Frost left in a huff because Boris Johnson simply doesn’t grasp its ideology – a deregulated, low (not lower) tax, entrepreneurial economy.

UK goods trade with the EU was 15.7 per cent lower than it would have been had Britain stayed in the EU’s single market and customs union

According to analysts at to the Centre for European Reform (CER), an independent think-tank, UK goods trade with the EU was 15.7 per cent lower than it would have been had Britain stayed in the EU’s single market and customs union. From a wider perspective and according to estimates from the Office for Budget Responsibility (OBR), Brexit had reduced the size of the U.K. economy by about 1.5 per cent. That was due to a fall in business investment and a subsequent transfer of economic activity to the EU in anticipation of higher trade barriers.

Both the CER and OBR agree that annual GDP in the UK is down by between 4 and 5 per cent. Let’s not forget what this really means. The crash of 2008/09 saw economic activity dive by 6 per cent – and that was a huge recession that saw a policy of austerity exerted that was the worst tightening of treasury spending since WW2. We all saw it, many felt it and it became known as the ‘lost decade.’ It heavily contributed to the destruction of the fabric of our society as we knew it and the divisiveness we now see all around us. Human Rights Watch, the United Nations and numerous charities warned what was going to happen. Now we have more food banks than McDonald’s in England – a damning statistic for the world’s fifth-biggest economy.

And whilst there might not be much sympathy for the banking industry or the City of London – we shouldn’t forget that according to a survey by accounting firm EY – the bigger threats to London will come from New York.  It has grown its share of derivatives trading and seen new jobs being created in the EU that if it wasn’t for Brexit, would have been created in the U.K.

One final thought to mention – this fall in GDP – expected to last at least 10 years, in recession terms, has only ever been exceeded twice since 1945.

Boris Johnson will see the numbers coming through before the public. He won’t take much notice until it means something to him personally. Those closest people to Johnson know he is as incompetent as he is dishonest. They also know there’s a renewed threat to Britain in the guise of Article 16.

To divert the news, Johnson is reckless enough to demand its triggering. Leaving aside the diplomatic fallout between neighbours – Johnson will do as he has done before – send out the right-wing press mob from the Express, Mail, Sun and Telegraph to somehow discredit our economic and political partners and allies. The result will be that focusing on fixing problems being experienced by small to medium-sized exporters will be neglected and may well get even worse.

Negotiators in Brussels will do as they have done in the past – and call Johnson’s bluff.  They will win and Johnson will crater – again.

“It wasn’t until 25 September 2020 that Johnson finally understood even vaguely what leaving the Customs Union meant. He sat back in his chair and looked around the room with appalled disbelief and shook his head.”

The big problem with this event is the continuing damage done to trust. When Johnson is finally booted out from No10 – and make no mistake, he will be, the damage done will only make the next PM’s job so much harder. Of course.

Like Dominic Cummings or not or indeed his motivations, he has some valuable insight into the chaos in No10 right now. How about this for just one insight into Johnson’s ability.

“It wasn’t until 25 September 2020 that he (BJ) finally understood even vaguely what leaving the Customs Union meant. I will never forget the look on his face when, after listening to Frost in a meeting on the final stage of the negotiation, he said, ‘No no no Frosty, fuck this, what happens with a deal?’ And Frost looked up from his paper and said, ‘PM, this is what happens with a deal, that’s what leaving the Customs Union means.’ The PM’s face was priceless. He sat back in his chair and looked around the room with appalled disbelief and shook his head.”

It’s not until you read these things that you understand the mindset of Johnson and that of the political factions inside the Tory party that pushed for Brexit. Boris Johnson is, as previously said – as incompetent as he is dishonest. And what that really means is that Brexit is a disaster right now, not because it had to be, but because it’s been pushed by people who have no idea what they are doing. And still don’t.