Britain’s democracy – being corrupted to the point of worthlessness 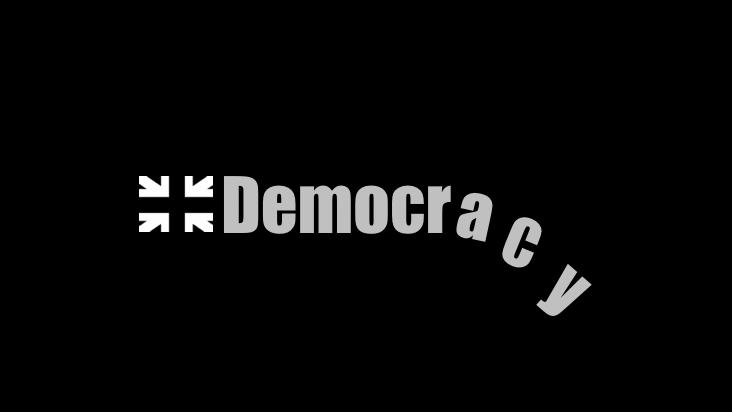 By Graham Vanbergen: Yet more scandals are engulfing the Tories. Apart from new cases being brought to the crown prosecution Service and two other unresolved cases involving the police and Electoral Commission, we have now heard of another incendiary political cover-up involving a report generated by Britain’s own security services. In the meantime, the Electoral Commission is swamped by complaints of breaches in campaigning – soon to accelerate as the general election approaches.

Ian Lucas is a British Labour Party politician and member of the Digital, Culture, Media and Sport (DCMS) Select Committee. He says quite openly that it appears, aside of paultry fines of £60,000 being issued to Vote Leave that the DCMS has secured yet more evidence suggesting illegal data sharing between different Leave organisations, including Vote Leave, in the 2016 Referendum. The evidence appears to show that data may have even been shared between Leave organisations and Michael Gove’s 2016 campaign for the Conservative Party leadership. This is currently being investigated by the Information Commissioner.

The three central figures fronting Brexit and dragging its result over the line were Johnson, Gove and Cummings, and are, of course, now running the country. They do so in a climate where not a single person walking the corridors of the House of Commons believes a word any of them say and nor does much of the electorate. Boris Johnson, a man who has made a career out of publishing misinformation and falsehoods now faces the country in an election of his own making. We should not forget that these men, if successful, are soon to take the UK out of the EU on the basis of a referendum immersed in scandal and characterised by its many electoral offences – with more accusations of the illegal assault of our democracy to follow.

The Electoral Reform Society, founded in 1834, is the world’s oldest operating organisation concerned with political and electoral reform. Its says of today’s democracy – “The current regulations have created a ‘Wild West’ open to exploitation and abuse, that Voter ID is designed to suppress on an industrial scale and that we now have an “overbearing executive and warped election outcomes” 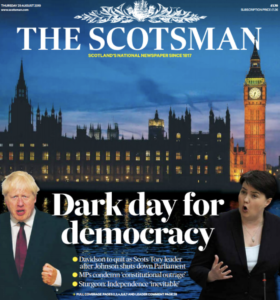 These two aforementioned unresolved investigations, by the Metropolitan Police and Information Commissioner, are outstanding – just as criminal charges against the pro-Brexit campaign led by Boris Johnson and his key adviser, Dominic Cummings, has now been passed by police to the criminal prosecution authorities. Quite bizarrely, the man in charge of electoral integrity is Michael Gove and he, along with Dominic Cummings have simply refused to answer questions by any authority in Britain regarding … electoral integrity. Equally as bizarre is that we have a prime Minister who is obstructing a parliamentary enquiry.

A few months ago, on the day that Boris Johnson became Britain’s PM, his former boss, Max Hastings, at The Telegraph described Johnson as being less than honourable – “while he is a brilliant entertainer who made a popular maître d’ for London as its mayor, he is unfit for national office, because it seems he cares for no interest save his own fame and gratification.” Hastings went on to predict quite accurately that Johnson’s premiership “will almost certainly reveal contempt for rules, precedent, order and stability.”

We also have a prime Minister, who when Foreign Secretary, was given limited access to sensitive intelligence of national security because he was not considered trustworthy enough by the government or the security services. The BBC wrote – “It is understood Theresa May and some in the intelligence community had worries about Mr Johnson’s ability to keep information confidential” and that there was a “nervousness over Mr Johnson’s lack of discipline.“

And in the last few days, Boris Johnson’s most senior advisor, Dominic Cummings is now embroiled in serious accusations by a whistleblower that he too cannot be trusted in Downing Street with information of national security due to links with a (hostile) foreign state – namely Russia. How true this is, one can only speculate. However, the two leading men running Britain appear to have issues relating to the security of our country – which is, after all, the primary duty of government in the first place.

Further evidence that our democracy is being picked apart is in the open but not reported by the mainstream media. In the six months from April to September, the Electoral Commission has investigated 42 cases against organisations for all sorts of misdeeds including accepting funds from impermissible donors, false accounting, over-spending, illegal use of expenses, illegal gifts and the like. Eighteen political parties across the country have been investigated as have half a dozen registered campaigning entities. Top of their hit list, emblazoned all over their website is Leave.EU, Vote Leave, Veterans for Britain, Ukip and Momentum.

These are the actions of people who do not believe in democracy in the first place. They only do it because they have no compelling story to turn electors into the believers of their cause. And, they are taking their example from the people who secured Brexit – by stealing the privacy data of millions, manipulating it with the world’s most powerful propaganda machine and spewing it all out – mixed with messages of racism and nationalism and of course, false promises.

Today we have a Prime Minister who games the system, is blatantly censoring the media, bans filming or asking even questions without prior consent. One national UK broadcaster, Channel 4 News was banned from interviewing Johnson at the G7 simply for being critical. Johnson does not allow interviews to be recorded or filmed by journalists without strict prior consent and even if invited – it is only in the form of a pre-determined script. 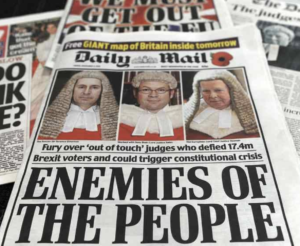 “We as Welsh media were invited to ask questions as part of a ‘huddle’ but on arrival, it turned out we wouldn’t be allowed to film it, So I’m invited to ask a question but can’t record it on camera and so can’t include it in my report on tonight’s ITV Wales news.  Masters went on to say: “I hate to have turned down the chance to challenge Boris Johnson but I wouldn’t have been able to broadcast any of it. I’d have had to read quotes to the audience tonight.”

Today in Britain, we have all the hallmarks of democracy being dismantled. Prorogation – a fancy word for cancelling parliamentary scrutiny, expelling party MP’s as political dissenters, media censorship, stoking nationalism and the far-right into action, using extreme mass surveillance systems, nationwide propaganda campaigns, rounding up and arresting inconvenient protestors (think XR), all of which, is leading towards the breakdown of law and order, requiring more police. It is the best description for an emerging authoritarian regime. And it is not me saying this – history keeps repeating itself – it says so.

Boris Johnson has been described as the most slovenly would-be authoritarian in contemporary history. The reality is that he is just taking advantage and stretching the boundaries, sometimes illegally, of the weakness of our democracy. This will not get better. More scandals and accusations of skullduggery will emerge. This is a trajectory.

Graham Vanbergen is the founder and contributing editor of TruePublica, a columnist for The European Financial Review and author of Brexit: A Corporate Coup D’Etat