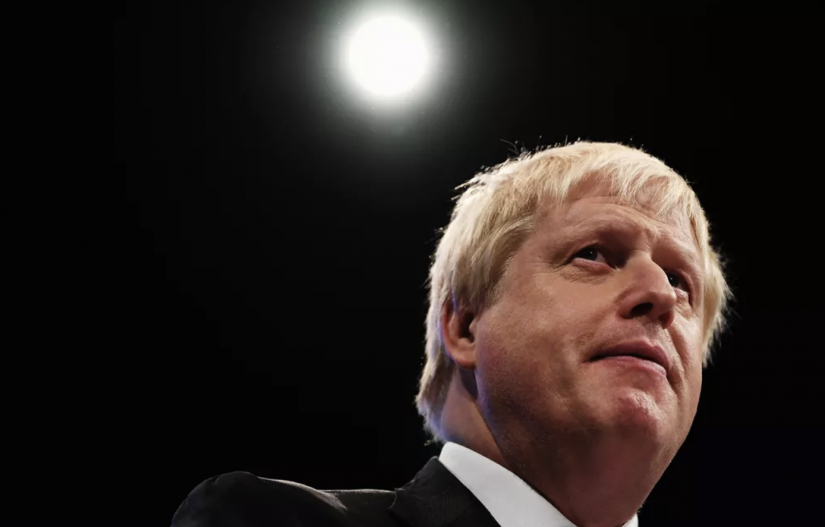 By Graham Vanbergen – TruePublica: Since becoming Prime Minister in July, Boris Johnson has suffered political defeats and scandals unheard of for any holder of the office before his time. No other has garnered so much challenge to a PM’s probity in so short a time. And while Britain’s electorate is simply not used to the open warfare tactics of (American style) politics where all the characteristics of a populist leader are somehow the new norm, there’s more of this to come in the final showdown.

The latest scandal to infest the political narrative of the day is that Johnson stands accused by a highly respected Times journalist, Charlotte Edwardes, of groping her at a lunch in the early 2000s, when he was the editor of the Spectator. Just before that blew up in Johnson’s face, last Friday, he was referred to the Independent Office for Police Conduct, in a criminal misconduct inquiry over claims surrounding his ‘friendship’ with pole dancing ‘entrepreneur’ Jennifer Arcuri. The initial loan in question of some £10,000 now stands at £700,000. Accusations that Accuri was more than just a friend and that she was given considerable privilege at the expense of the taxpayer now lays at the feet of Johnson. Investigative journalists will be digging deep to unearth any salacious scoop worth a headline from here. Like Trump, Johnson’s historical antics be it personal or professional, are now part of the court of public opinion. Sleaze and corruption are considerable factors in electing PM’s in Britain and always have been. 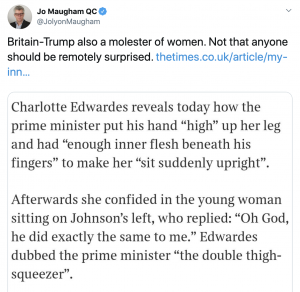 Another fire lit during the week saw Johnson dealing with accusations he is deliberately stoking up the potential for civil unrest in order to prorogue parliament under emergency powers to push through no-deal.  This is an abuse of power, that if found to be true would be unprecedented at all levels. With Dominic Cummings pulling the political strings – anything is possible.

In combatting accusations of inflammatory language, Johnson’s Trump-like response was to call himself a ‘model of restraint.’ This was met with political parties formally agreeing to tame this language yesterday. Johnson will, of course, dismiss this restraining order and carry on in his quest for power and repay his backers handsomely – another very serious accusation being considered by the head of the civil service, whose own department is now on the verge of abandoning government orders. This is because senior civil servants could be forced to break the law and face the possibility of prosecution if they help Boris Johnson’s government defy the will of parliament.

The week before, eleven supreme court judges found Johnson had intentionally acted unlawfully in proroguing parliament, the result is that yesterday it emerged that the Queen could now step in and dismiss the PM. The man who made this claim happens to be the Queen’s Counsel and Privy Counsellor. He has been the Member of Parliament since 1997 and served as Attorney General for England and Wales and Advocate General for Northern Ireland. Whatever you may think of Dominic Grieve or his Brexit position (which is Remain) – he knows the law in this area like no other and has clearly set the challenge to the current attorney general. The three institutions that make Britain what it is – the monarchy, the judiciary and parliament are now at war with each other – another first (for several centuries).

The 31st of October is the ‘do or die’ date, confirmed on numerous occasions at the Tory party conference this week. By backing himself into this corner Johnson’s gameplan is soon to unravel.

His options are not good irrespective of the confident rhetoric. The first is that Johnson must secure a deal that the EU will approve of – that must somehow survive parliamentary scrutiny (failed 3 out of 3). In that unlikely event, he must do so in a way that helps him secure a majority in the much-expected snap general election. But by capitulating to a slightly modified Theresa May deal – Johnson will lose that election. Even then, the Northern Ireland backstop requires a massive capitulation from the DUP. This is a plan that yesterday was presented and this morning rejected.  In addition, the EU knows Johnson will struggle at best to get a deal through parliament – and it knows an election is right behind that, so its incentive to compromise is tantamount to nil. The EU continues to play the game by the rules of its membership and demonstrates to the EU27 that crashing out is a painful exercise – both politically and economically. This is the reason why those dissenting member states in the EU have gone quiet – they want to see if there is indeed a survival plan to exiting.

Another more realistic option for Johnson will be more chaos by (Dominic Cummings) design. For one, he could choose to admit defeat in parliament and resign. The snap election is won if you believe the pollsters. I wouldn’t bet on that outcome. The pollsters have been playing their own games. They were wrong by big margins at Theresa May’s snap election, largely at the EU referendum result and wide off the mark with David Cameron’s unexpected win back in 2015 – all the while illegally selling information to the hedge-funds and profiting from shorting the result they knew in the first place. Either that or they are useless at what they do. But in both scenario’s, you the elector is fed the wrong information. The current 30% Tory – 20% Labour result they are predicting is nonsense as tactical voting and coalitions will be the order of the day come the next election.

Another option that is probably easier to propagandise will be a dramatic walkout from the European council. Blaming the EU for being unreasonable in negotiations has worked before, especially with Leavers. However, this tactic doesn’t actually achieve much.

Then, there’s the Benn Act – a law that directs an extension to A50 being requested. At this point, its ‘die in a ditch’ time – the phrase that Johnson used to express how much he wants this option. He could say that he has no option but to comply with the law – but then his credibility is thrown straight out of the window and Farage, who is currently keeping quiet, will then rise as the true Leavers voice. Johnson will avoid this at all costs. We just don’t know how yet.

As mentioned, calling on emergency powers (as a result of civil unrest or some other cooked up event by Cummings) is definitely a possibility and one that could force through no-deal. One could say that this is a high-risk strategy – but then whole game plan, if there is one, has been high risk from the start of Johnson’s rise to No10 Downing Street.

If all else fails, it’s back to attacking a “remainer parliament” that has obstructed the “will of 17.4million people” – with the continued implosion of the Tory party and challenges to a weakened constitution that could entail. But at this point, a decision would have been forced one way or the other.

One option that has now gone completely off the chessboard is that nothing happens. It’s checkmate for something. If Johnson survives the 31st October – it won’t be because he’s played by the rules.

Whatever happens, the showdown date is now almost upon us. Each excruciating day is wearing down the electorate who by now are starting to fall into the ‘disaster capitalists’ trap of opting for anything as long as it’s done. This is how populists survive and democracy dies. Brace yourselves – there are more shocks to come yet.