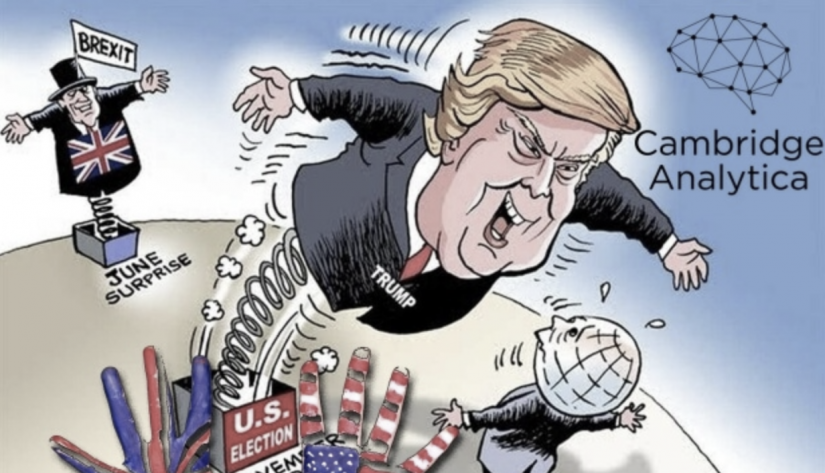 By TruePublica: Cambridge Analytica is back in the headlines. The disgraced data analytics firm conducted work for the Leave.EU campaign and UKIP ahead of the 2016 referendum on European Union membership. This is according to a former Cambridge Analytica official.

A quick refresher. Cambridge Analytica Ltd was a British political consulting firm which combined data mining, data brokerage, and data analysis with strategic communication during electoral processes. Or, another way of putting it – it used stolen data, strategies designed by the US/UK military for battles zones and inflicted untold damage to Britain’s democracy by illegally influencing the outcome of the EU referendum.

It worked for Donald Trump’s presidential campaign as well as for Leave.EU  – and CA’s role in those campaigns has been the subject of ongoing criminal investigations in both countries.

The latest revelation — outlined in internal emails between the data analytics firm and the political groups in question was submitted on Tuesday to parliament. They contrast with repeated denials by both Leave.EU and UKIP that they used Cambridge Analytica to target voters during the Brexit ballot.

There is an informational war going on every day for your personal data, which is now being weaponised in order to manipulate you into voting the way those people who have bought your data want you to vote – and they have been remarkably successful.

Brittany Kaiser, the former head of business development at CA said that Leave.EU used datasets created by Cambridge Analytica to target voters with online political messages to potentially sway public opinion in 2016. The company has been at the centre of a worldwide scandal about the illegal scraping of digital information from millions of Facebook users without their consent, and how this data was potentially then used for targeted political advertising.

“I have strong reasons to believe that those datasets and analyzed data processed by Cambridge Analytica as part of a Phase 1 payable work engagement … were later used by the Leave.EU campaign without Cambridge Analytica’s further assistance,” Kaiser wrote to Damian Collins, the head of the U.K. parliament’s digital, culture, media and sport committee, which has held a series of hearings into the matter over the past 18 months.

“The fact remains that chargeable work was done by Cambridge Analytica, at the direction of Leave.EU and UKIP executives, despite a contract never being signed,” she added, alongside a number of internal documents outlining the relationship between her former employer and the British political groups.

This potential targeting of U.K. voters on social media ahead of the Brexit vote is part of a wider push by political groups across the Western world and beyond to use digital political campaigning to target people with increasingly sophisticated messages. It comes as lawmakers and policymakers are calling for greater oversight over how these groups use the likes of Facebook, Twitter and Google amid concerns that there is a lack of control over how these digital political campaigns operate.

“Data profiling of voters was done at a more sophisticated level in the referendum than ever before,” Collins, the British politician, told POLITICO.eu. “It’s a big concern, we should pass emergency legislation to mandate transparency in political campaigns.”

Leave.EU and UKIP have repeatedly denied they paid Cambridge Analytica for work ahead of the Brexit referendum despite public statements from Arron Banks, the co-founder of Leave.EU, that his group had hired the firm. Later, he backtracked to say that no contract had ever been signed between the two sides.

“When we said we’d hired Cambridge Analytica, maybe a better choice of words could have been deployed,” Banks told UK Mp’s. “Did we hire them? Clearly not, because we didn’t pay them or sign a contract.”

Cambridge Analytica went bankrupt after its role in online targeting of voters, particularly in the United States, became public in 2018. Facebook has also been fined $5 billion by U.S. authorities. The British use of fines through the Electoral Commission is particularly weak. Fines are tiny and meaningless.

In a series of internal emails provided by Kaiser, the former Cambridge Analytica executive, to the UK parliament on Tuesday, the relationship between Cambridge Analytica and the Brexit groups is outlined in greater detail than ever before. That included discussions between both sides on early-stage voter analysis conducted by the firm, as well as concerns about whether such work could have broken the UK’s data protection rules.

According to the documents, Cambridge Analytica executives discussed strategy with Leave.EU over how to publicize the firm’s findings, and planned at least one dinner with Nigel Farage, the frontman for the Leave.EU campaign.

In previous UK parliamentary testimony, Kaiser said that the firm had sent a £41,500 invoice for its work on the Brexit referendum to UKIP, in part so that it could analyze the political party’s internal data because Leave.EU did not hold much digital information on its own.

“We are working with the campaign and their various partners to identify, profile and engage voters in the lead-up to the referendum on Britain’s EU membership,” according to an internal Cambridge Analytica email that outlined its relationship with the Brexit groups. “We have extensive experience providing data-driven political communications advice to campaigns around the world, including at the highest level of U.S. politics.”

Since the revelations of CA and their involvement in the illegal use of millions of individual profiles in manipulating political outcomes – the social media and search engine giants have created what has been described as a massive crime scene.

There is an informational war going on every day for your personal data, which is now being weaponised in order to manipulate you into voting the way those people who have bought your data want you to vote – and they have been remarkably successful.

On 1 May 2018, Cambridge Analytica and its parent company filed for insolvency proceedings and closed operations. It then simply rebranded and is back in operation at a phoenixed organisation called Emerdata.

The UK’s official registrar of businesses and organizations, Companies House, lists an active company called Emerdata Limited, headquartered at the same offices as SCL Elections and run by much of the same management and investors as Cambridge Analytica. It even describes itself as a “data processing, hosting and related activities” organisation.