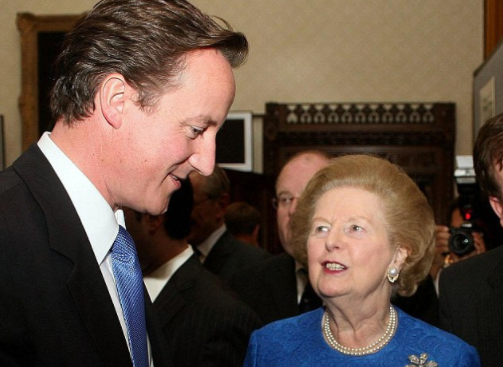 By Robert Woodward TruePublica Columnist: Sometimes you come across a story that seems so unbelievable that you simply can’t absorb and process the information properly. It doesn’t compute or make much sense – until an investigation produces evidence.

The allegation is this. David Cameron sold three nuclear weapons of a foreign state, put them in unsafe hands and the Conservative party banks nearly £19 million which then sets the pretext for a conflict that kills a million people. Conspiracy theory? Fake news? Read on.

From Wikispooks [1]: Although UN Security Council Resolution 418 of 4 November 1977 introduced a mandatory arms embargo against South Africa, requiring all states to refrain from “any co-operation with South Africa in the manufacture and development of nuclear weapons”, it was with the help of the Israelis that the apartheid regime designed and built a total of 10 fully operational nuclear weapons. One device was successfully tested in 1979, which left 9 nuclear weapons in South Africa’s stockpile.[2][3] In August 1988, foreign minister Pik Botha announced that South Africa had “the capability to make one [a nuclear weapon]” should it want to do so. A month later, in September 1988, South Africa sent a letter to IAEA Director-General Hans Blix expressing willingness to accede to the Nuclear Non-Proliferation Treaty (NPT) if certain conditions were met, primarily that South Africa be allowed to market its uranium subject to IAEA safeguards.

In summary, South Africa operated a covert nuclear ballistic missile program. The United Nations introduced a mandatory arms embargo against South Africa in the development and manufacture of such weapons. Israel assisted anyway. The result was that nine nuclear weapons were left after testing. The purpose was to prove to international markets it had that capability and was willing to sell that capability to willing buyers.

Peter Eyre is a documentary film maker who specialises in Middle-Eastern wars, weapons technology, terrorism and human rights abuses. He wrote a series on the subject of the UK’s involvement in the selling of South Africa’s nuclear weapons.

Eyre writes that David Cameron visited South Africa in 1989 accompanied by Conservative MP, Sir Kenneth Warren, and nuclear weapons inspector, Dr David Kelly. Kelly had made a number of earlier visits having been given access to the covert nuclear weapons research facility at Pelindaba, near Pretoria.

An excerpt from part two of his documentation [4]: “I find it amazing that David Cameron and others travelled to South Africa during the embargo period and not only violated international law but also violated international law in dealing with nuclear weapons that were not known to the UN. In 1989 David Cameron and others went down to South Africa to carry out some sinister plan that resulted in only 6 operational nuclear weapons going back to the US for de commissioning.The other three were to be purchased by the British Government as a standby mechanism against Saddam. Remember this is all under the radar of the United Nations!”

Eyre stated that David Cameron’s trip, although officially ‘a fact-finding mission,’ [5] which was heavily criticised at the time, was to arrange for three of South Africa’s nuclear weapons to be shipped to the Arabian peninsular, where they would be stored in case they were required in Iraq. This fact alone is alarming. These weapons were not only stored unsafely but they were stored in a volatile region and subsequently went missing.

More from Wikispooks: The remaining six nukes were destined to travel from South Africa to Chicago in the US. The next phase of the operation was that, once the weapons had left South African soil, the British Government would reimburse the South African firm Armscor [6] and the British firm Astra through the middle man John Bredenkamp [7] At Government level it would be dealt with primarily by the Department of Trade and Industry (DTI) using Ministry of Defence money. In order to keep this out of Parliament and out of the public domain, Margaret Thatcher was asked to sign off these weapons in late 1990 under a special Urgent Operational Requirement (UOR) describing them as metal cylinders rather than nuclear bombs.

Excerpts from part 4 of Peter Eyre’s documents: “These weapons were then shipped in standard 20 foot containers and manifested as metal cylinders and not nuclear weapons. This would have been in violation of international regulations regarding the shipment of dangerous goods. The weapons were then placed into private storage and left for Dr.David Kelly to carry out an inspection in order to accept the consignment prior to final payment. Dr David Kelly was the only person in mainstream UK MOD tasked with being in the loop for that covert offshore procurement of battlefield nukes from Apartheid South Africa.”

Eyre’s documents show that the final inspection was then carried out, the final payment made by the British Department of Trade and Industry (DTI) using money from the Ministry of Defence (MOD) and it was subsequently revealed that £17.8 million was siphoned from this secret nuclear deal into Conservative Party funds. Eyre is unequivocal about this:

“It should also be pointed out that David Cameron managed to siphon off £17.8 million pounds of tax payer´s money into the Conservative Party Election Fund.”

Veterans Today claim [8] they actually had personnel there for the trip from South Africa with the three nuclear weapons disguised in cylinders:

“There, the bombs were loaded onto Blatchford cradles and moved into blue 20 foot containers.  VT personnel were along for the ride to Durham where they were put on a ship, a ship arranged for by John Bradenkamp, a Rhodesian/Zimbabwean arms trader only recently off the terrorist lists. This represented David Cameron’s “blooding” as a real “insider.”

VT then makes a really big statement: “What was the nature of that deal?  Britain was to simply unload the weapons, leave them unguarded and walk away.  They never mentioned them again, never looked for them and never asked questions even when one of the bombs supposedly belonging to Britain was exploded by North Korea on May 25, 2009.” [9]

Analysts have generally agreed that North Korea’s nuclear test was successful and despite uncertainty of the exact yield, Russia placed the yield of the test at 10 to 20 kilotons. The Defence Minister of South Korea confirmed similar findings. The description of these weapons were: 3 x Pelindaba Pretorea, Battlefield Ready 20kt Nuclear Bombs.

The VT article goes on to say that Britain and the US invaded Iraq to seize these weapons back stating: “There are 3 nuclear weapons in Iraq, only 45 minutes from assembly and use.”

The damning document that led to war is described as the “September Dossier” [10] which says: “However, two sections later became the centre of fierce debate: the allegation that Iraq had sought “significant quantities of uranium from Africa”, and the claim in the foreword to the document written by British Prime Minister Tony Blair that “The document discloses that his military planning allows for some of the WMD to be ready within 45 minutes of an order to use them.”

The dossier also alleged that Iraq had reconstituted its nuclear weapons programme. Without exception, all of the allegations included within the September Dossier have been since proven to be false, as shown by the Iraq Survey Group. No nuclear weapons were subsequently found, leaving open-ended questions of their whereabouts.

On 8 February 2015, it was revealed that the Chilcot Inquiry had been tasked specifically with tracking down those responsible for “misplacing” three nuclear weapons obtained from apartheid South Africa 25 years ago. Both David Cameron and Dr David Kelly are understood to have been involved in the diversion of these WMD which eventually became the pretext for the Iraq War [11].

Dr David Kelly was found dead in controversial circumstances in July 2003. A group of doctors later published reports that stated the cause of death was unsound and illogical.

In the meantime the documents displayed on the VT website appear to back up the selling of a nuclear weapon to North Korea:

(The documents above are expanded below to make them readable)

I make record in this legal communication, that these Conservative Government Corruption Facts were disclosed and exposed in “Classified” Document form to the then Labour Party leadership by a senior civil servant, Ms TARA ANDREA DAVISON then an ARMS to IRAQ Investigator who went on to be Senior INTELLIGENCE ADVISOR to the Select Committee of the Department of Trade and Industry under Kenneth Warren and MP Peter Lilley.

That you have further used your respected official position as Attorney General to protect those involved, by covering up the official involvement of DR DAVID KELLY, who was ordered by the then Conservative Government to oversee this covert Nuclear WMD operation that turned into a CONSERVATIVE POLITICAL disaster when John Bredenkamp and his ex SAS Group stole the Nuclear Weapons in OMAN and sold at least One Nuclear Bomb to North Korea.

To use your Office to further protect the expose of those MP’s, Grandees and VIP’s involved in the Criminal Covert government / Private finance purchase in 1991 of 3 x Pelindaba Pretorea, Battlefield Ready 20kt Nuclear Bombs.

I include as an attachment the one page article disclosure and accusations of Conservative Government Corruption by:

This document supports the allegation that £17.8 million of taxpayers money was illegally laundered into Conservative party funds to fight the election of 1992:

One page of over 400 “Classified” I recovered without copyright from the personal web blog of Ms TARA ANDREA DAVISON on the Internet before they were removed.

Given Ms TARA ANDREA DAVISON gives clear statement in the attachment, that the Derbyshire Police have acted beyond their official remit and acted as a Conservative Political Party agent, to seize and withhold vital criminal evidence required by the “PUBLIC” CHILCOTT IRAQ Inquiry.

I also understand, that you replaced MP Tim Smith in the Constituency of Beaconsfield

I am also informed, it was Tim Smith who had inside information regarding the LAUNDERING of the deliberate criminal overcharge to the Treasury of £17.8 Million (A theft of TAX PAYERS assets)  via a front Company of John Arnold Bredenkamp into the “EMPTY” 1991 Tory accounts to fight the 1992 General Election: HANSARD JUNE 22  1993 from Column 197

I await your official reply.

As further evidence, old Labour Oxford Economist Martin Summers talks about what he believes was the secret and highly illegal nuclear arms deal involving a young and ambitious David Cameron as well as Doctor David Kelly. Done behind the back of Nelson Mandela and the ANC, designed to raise £17.8m Tory funding for the 1992 General Election Campaign in this VIDEO entitled:

Britain’s Assassination Programme Stretching Back To 9/11