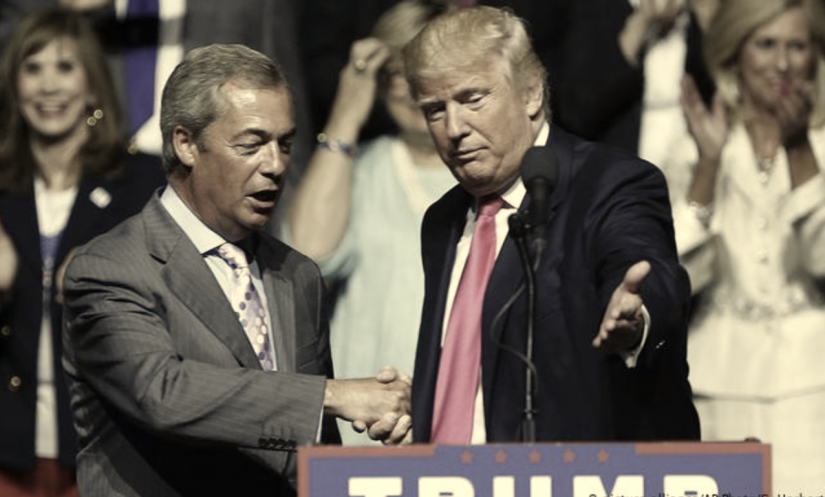 TruePublica Editor: I said that this moment would come. It has almost arrived. I warned that Britain is to become a European outpost of America (READ: The global alliance taking over Britain) and if ever proof was needed, it is the admission from the Trump administration that their latest demands must be adhered to – or else. First, it came with threats within the impending UK/US trade deal. It was full access to the NHS or else. Then the reduction of food standards or else. Next was the UK’s position on 5G – or else, Then came the almost forced ejection of a British diplomat they didn’t like – or else. Last week, it was drop the new digital tax or else – and now it is the demand that ‘British politics must be realigned’ to create a better political and economic fit with America – or else. This is not democracy.  It’s already frail flame is being snuffed out by the world’s bully boy.

At TruePublica we have reported on the arrival of US-style attack dog political operations opening in Britain. We have reported on far-right organisations setting up and the millions in American dark-money funded activities designed to overthrow British electoral laws and overturn progressive legislation. From openDemocracy comes yet another report of the Americanisation of Britain that should alarm everyone irrespective of their Brexit stance or political persuasion. This latest step, if allowed, will bring a serious escalation of corruption to British politics – it will be as I said all along – a corporate coup d’etat.

Stark warning of US-style Super PACs arriving in UK as Brexit Party leader launches dark-money-funded campaign group in New York. Last week Nigel Farage launched a campaign group in the US. Now an MP has written to the Electoral Commission demanding an investigation.

In the letter, seen by openDemocracy, the shadow cabinet office minister Chris Matheson says that the revelation last week that Farage has founded World4Brexit to raise funds from the US “raises serious questions”.

World4Brexit is registered in Michigan and chaired by Peggy Grande, a former executive assistant to Ronald Reagan. It is registered in the US tax code as a 501(c)(4) organisation – which means it does not have to reveal who gives money to it. Organisations like this play a controversial role in US politics. Other examples of 501(c)(4) bodies include well-known US political groups such as the National Rifle Association, Democratic Socialists of America, and the Tea Party Patriots.

In an email today, Grande responded to openDemocracy’s question about who funds World4Brexit, saying: “The group is being privately funded by donors who are supportive of our mission. We have received online donations ranging from $1 to $1,000 and we have other supporters who are aligned with our stance on free bi-lateral trade between the US and the UK and believe that the results of a fair election should be fully implemented, the very essence of a democracy.”

According to the Financial Times, who first revealed the existence of the group, Farage said all of its donations would be “above the board and legal”. Farage met Donald Trump in the White House on Wednesday and told the FT:

“Trump wants to see a realignment of British politics. The Remain side is already having a realignment but now the right will have to realign too.”

Asked about Farage’s role in the organisation, Grande said: “While we are supportive of Nigel Farage’s efforts with the Brexit Party and agree with his call for a complete Brexit on October 31, we have no formal affiliation with him as an organisation or with our funding.”

The 501(c)(4) code allows an organisation to spend money on political activity in the US, so long as that is not the majority of its spending and the money isn’t spent promoting a specific US candidate. The freedom to keep donors anonymous gives this model an advantage over Political Action Committees (PACs) and Super PACs for those who wish to keep their funders secret.

In their letter to the Electoral Committee, Chris Matheson MP said: “501(c)(4) organisations have for years sat at the heart of dark money scandals in US politics, and campaigners have long argued they provide a backdoor route for incredibly wealthy individuals to subvert democracy.

“It is clear that money raised anonymously in the United States, and possibly other countries, will find its way to the United Kingdom. This is in itself not illegal, but it does raise urgent questions as to what that money will be used for and what steps the Electoral Commission should take to secure reassure that public that no electoral laws are broken.”

The letter also notes that Farage had said US political operative Gerry Gunster was behind “the American end” of the organisation, according to the FT, and asks the Electoral Commission to investigate his role. Gunster also played a key part in the Leave.EU campaign, which was funded by Arron Banks, fronted by Nigel Farage, and found to have broken electoral law by failing to declare the cost of Gunter’s involvement.

Asked about Gunster’s role in the organisation, Grande told openDemocracy:

“Gunster Strategies is one of many professional organisations who are assisting with the advancement of our message. We have multiple advisers both domestically and internationally who have been helpful in launching World For Brexit [sic].”

World4Brexit was launched by Farage in New York last week, at an event that was attended by prominent Republican operatives, including former Trump campaign manager Corey Lewandowski, according to the FT.

After working on the Trump campaign, Lewandowski founded and then left two lobbying firms, amidst controversy around paid-for access to the president. The New York Times reported in 2017:

“as he takes on an increasingly broad role as an unofficial White House adviser, he is building a roster of clients with major interests before the Trump administration… Mr. Lewandowski appears to be positioning his new firm as an “advisory” business, part of a growing cohort of Washington influencers who advise companies on how to navigate the government but do not register as lobbyists or disclose their clients.

The business, the paper wrote, “puts Mr. Lewandowski at the center of the ethical quandaries surrounding the Trump White House, where the president has given significant access and power to friends and loyalists who are not on the government payroll but work as lobbyists or retain significant outside business interests”.

In an email to The New York Times, Lewandowski wrote: “I don’t lobby and I don’t intend to lobby – ever”.

Asked about Lewandowski’s role in the organisation, Ms Grande said:

“Our launch events were private so we will not be confirming or disclosing any individual attendees, although I can tell you that the gentleman in question does not have any role in our organization.”

In fundraising documents linked to World4Brexit’s website, the organisation says that money will be spent on activities including “offices in London, Washington and Brussels”, lobbying and influence in the UK and elsewhere” “Ongoing US fundraising and support”, “Global events with high-profile international speakers” and “Social media and advertising”.

In his letter to the Electoral Commission, Matheson, who is a member of the House of Commons Culture, Media and Sport select committee, which conducted the recent inquiry into fake news, writes:

“Democracy, here in the UK and in the United States and Europe, has in recent years been subverted by vast amounts of dark money and by individuals and organisations intent on disregarding electoral law to the benefit of extreme right-wing ideas. This has undermined public trust in democracy.”

“Worryingly, events of the last few years, the establishment of World4Brexit and the anonymity of its donors suggests we may be entering a new period of UK politics, in which we see the emergence and increasing influence of [US-style campaign finance organisations], which use vast amounts of dark money to reshape public opinion and win elections, as has recently happened in Spain”, the letter continues, referring to openDemocracy’s investigations of the Trump-linked Spanish ultra-conservative group CitizenGo.

The letter goes on to ask the Electoral Commission to investigate under what UK laws the group can be regulated, such as whether it ought to count as a members’ association within the Brexit Party, or whether it ought to be registered as a non-party campaign group.

World4Brexit is not currently registered with the Electoral Commission as a third-party campaigner. Asked about a future UK office and registration, Peggy Grande said:

“Our goal is to have a global presence and we plan to have a U.K entity. Similar to our legal status in America, we will register with the appropriate oversight organizations at that time.”

Responding to questions from openDemocracy about World4Brexit, a spokesperson for the Electoral Commission confirmed it was aware of the new group, saying: “As we are not currently in a pre-election period, there are no rules relating to spending by registered or unregistered non-party campaigners.”

The spokesperson continued: “Should there be an electoral event, such as a general election, non-party campaigners must register with the commission if they intend to spend more than £20,000 in England or £10,000 in Scotland, Wales or Northern Ireland on regulated campaign spending in the regulated period. If an organisation does not register, or is ineligible to register, they must not spend over these amounts on regulated campaigning.”

However, organisations registered outside the UK are not allowed to spend more than £10,000 on an electoral event.

“From the US to Europe, vast amounts of dark money is making its way through a web of connected organisations that share the same goal: to subvert democracy in the interest of right-wing ideas.”

“Securing free and fair elections in this context is increasingly difficult, and requires politicians and the Electoral Commission to try to shine a spotlight on the activities of those that would disregard this crucial principle.

“Even if World4Brexit operates completely above board, we need concrete assurances that this is, and will always be, the case. In the light of past transgressions by related parties, to rely solely on the word of those involved would be an abdication of responsibility.”