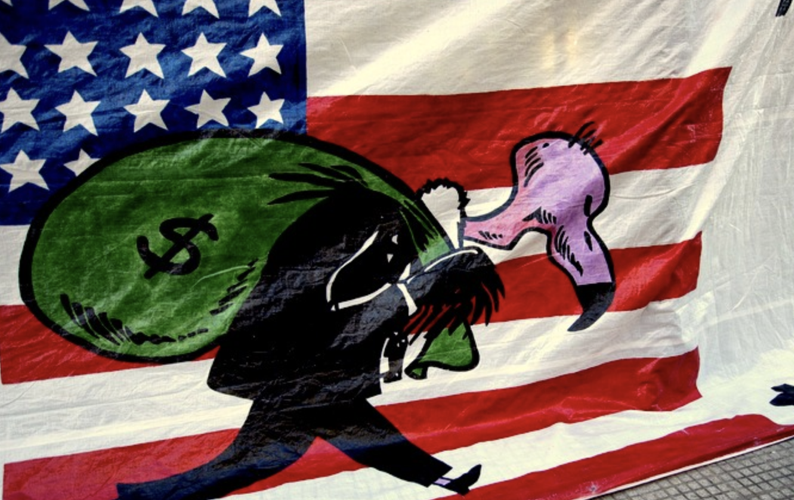 By TruePublica Editor: After Britain’s EU referendum result in 2016, the money, time and effort that had been put into the campaign to wrench Britain away from the EU had finally paid off. Hundreds of millions of dollars of ‘dark-money’ had poured into shady think tanks, front charities and organisations to push the final million votes over the Leave line. Billionaires, hedge-funds and vulture capitalists sided with climate deniers and corporations in a quest to pillage a nation and tear apart the European project that had been frustrating their profits for decades. SCL, Cambridge Analytica colluded with Facebook using a military perfected system of propaganda to rob a nation. Social media was the heart of this circulatory system where the endgame was nothing more than to stick a money funnel down the throats of an unsuspecting nation.

And as if any more evidence was needed, here is an article from a few months after Britain’s seismic decision by America’s CNBC entitled:

Brexit is a ‘God-given opportunity’ to steal trade from UK

Its first line reads – “Wilbur Ross, President-elect Donald Trump’s pick for Commerce secretary, has urged other countries to exploit the “God-given opportunity” to steal business from the U.K.”

As Commerce secretary, Ross is among those responsible for negotiating a free trade deal with the UK. There is no speculation that the US seeks to exploit the uncertainty created by Brexit in order to lure business away from London – that’s the endgame. That was why so much money was spent – they want a return on their investment.

“Wilbur Ross’s comments are a stark reminder that the trade deals Britain will agree in future will not depend on goodwill from our partners, but on their own shrewd political and economic calculations. This government has failed to articulate a coherent vision of what kind of economy Brexit Britain will be. This makes us weak and vulnerable in the eyes of others” Barry Gardiner, the Shadow International Trade secretary told The Times back in 2016.

Wilbur Ross, known in the global markets as the “King of Bankruptcy” is a typical American billionaire. Wilbur Ross’s expertise is vulture funding. He seeks out corpses and makes big money from reselling in certain types of stressed markets.

And why did Trump make Ross his Commerce Secretary – it’s easy really, Ross saved Trump from outright bankruptcy. In the 1980s, Donald Trump’s three casinos in Atlantic City were under threat of foreclosure from lenders. Ross, who was then the senior managing director of Rothschild & Co, represented investors in the casino. Along with Carl Icahn (now ‘Special Advisor’ on regulatory reform to Donald Trump), Ross convinced bondholders to strike a deal that allowed Trump to keep control of the casinos. In the end, years later, Trump bankrupted those casino’s and yet managed to walk away with millions.

Ross has also referred to Brexit as the “most expensive divorce proceeding in the history of the world.”

The 79-year-old private equity billionaire has endorsed the “Trump trade doctrine,” which stipulates that any new trade must reduce the U.S. trade deficit, strengthen manufacturing and boost growth. Britain has a trade surplus with the U.S. and therefore, under a trade agreement, it must be reversed to America’s advantage – or there’s no deal.

This doctrine is the most damaging to the UK’s interests when it comes to Brexit. A trade deal with the US has now been widely accepted even by the British government as being worthless. It will generate 0.1 per cent of additional GDP and even then only after 10 to 15 years. In the meantime, America will plunder the NHS, buy up successful British companies to get seated on their boards and use them to buy further assets in a market stressed by a recessionary economy and falling currency. American money will pour into assets, only for them to be stripped and sold for profit. Pharmaceuticals, agriculture, chemicals, technology – you name it, American corporations will use the deregulation festival to impoverish Britain, just as they have done to other countries around the world.