Post Election – Do Britons trust the BBC or the press? 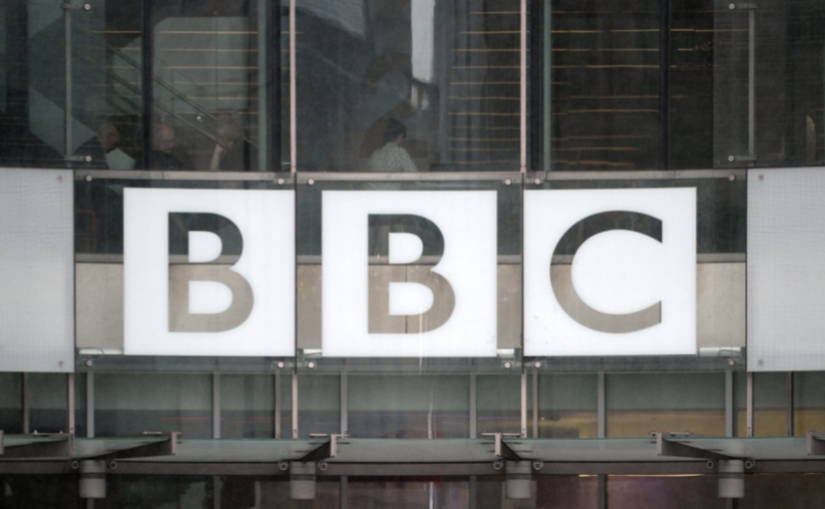 The short answer to the question – do Britons trust the BBC or the press, is no. The slightly longer answer is no – and levels of trust have fallen even further when they reached rock bottom a year ago. Significantly, only 8 per cent of people trust BBC news journalists a great deal. Trust has dropped to 48 per cent not trusting the BBC at all or not much. Even then, another 36 per cent only trusts journalists at the BBC ‘a fair amount.’ In other words, a great deal of scepticism and cynicism about BBC news journalists is a reality. I would tend to suggest that this latest YouGov survey, which was conducted on the first two days of December, just 10 days prior to the election on the 12th, would now be even worse.

Three in four adults absorb BBC news content in some form during the election campaign and in a two-week period just before it between November 11 and November 24, the BBC received a record 24,400 complaints, including allegations of bias against both main parties, according to the Times.

Laura Kuenssberg, the broadcaster’s political editor, has been catapulted as the No1 enemy of the left, which accused her of persistently framing her coverage in favour of the Tory party. She has a way that manages to irritate and annoy and its hardly surprising that the BBC is critised when it is forced to makes apologies and does it badly. Reading this piece demonstrates why the BBC is not trusted. Keunssbery is accused of creating ‘fake news’ in the run-up to the election and the framing of the BBC’s apology tells us why they are not trusted. It is the same HERE and HERE, You can also read about accusations that Keunssberg was being manipulated by No10 Downing Street during the election (HERE).

Keunssberg has even gone as far to defiantly amend her Twitter bio to “I know it’s fashionable, but even in 2019 there is nothing big or clever about shooting the messenger” – confirmation indeed that she is acutely aware of the situation.

YouGov polling revealed that whilst faith in BBC News journalists, has dropped, the trend is not unique to the broadcaster, with trust in journalists falling across the board.

Less than half of Britons (44%) now say they trust the institution to tell the truth despite its public charter to remain politically neutral. This is a fall of seven percentage points since October. 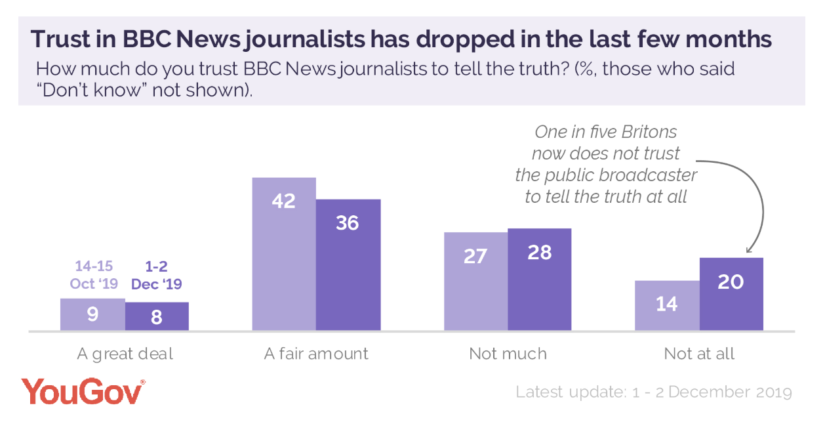 Perceptions mean everything in our world today. Half of Britons who backed the Conservative Party in 2017 (53%) say they don’t fully trust BBC News journalists to tell the truth, compared to 49% and 33% of 2017 Labour and Lib Dem voters respectively.

Among those who voted to leave the European Union, only two in five (40%) say they trust the broadcaster, compared to 54% of remain voters. Class also plays a part in trusting the BBC, just 37% of C2DE adults trust BBC News to tell the truth compared to 49% of ABC1 adults.

YouGov also compared “up-market newspapers” like The Times and The Guardian, with mid-market papers such as The Daily Mail and the Express, and tabloids like The Sun and The Mirror, and revealed that UK adults have also lost trust in newspaper journalists since the general election began.

Britons are most likely to trust journalists working for the likes of The Times and The Guardian to tell the truth – overall a third (34%) of Britons say they trust these newspapers, but this is still down four percentage points from 38% in mid-October. 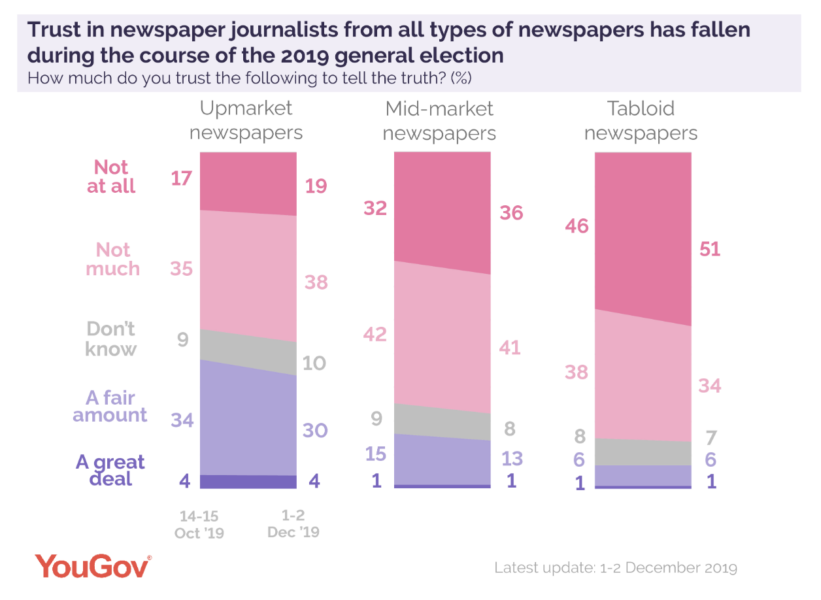 Looking across party lines, trust of newspapers has also broadly fallen, however levels of trust among those who backed the Liberal Democrats at the last election have plummeted despite this group having the most trust in the BBC. For upmarket newspapers, the number of 2017 Lib Dem voters who say they either don’t trust the newspapers to tell the truth at all or much has risen nearly 20 percentage points from 35%, to 54%. 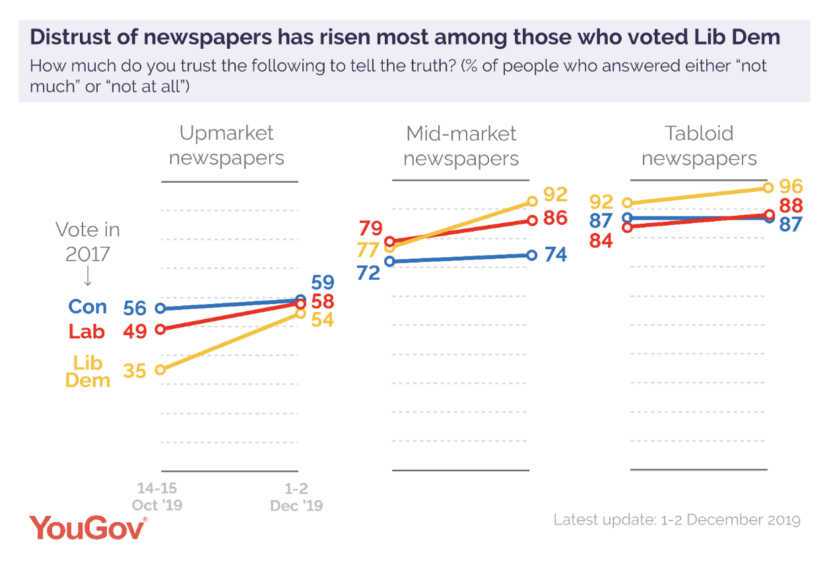 As for the tabloids, distrust from Lib Dem and Labour voters has risen four percentage points since October, with 96% and 88% respectively now saying they wouldn’t trust these newspapers to tell the truth to some degree.

The upshot of this survey is that trust in the institutions overall continues to fall – with the media, especially the BBC, becoming a casualty of political informational wars being fought right in front of us. From social media giants being fined billions for peddling fake news to newspaper rags shoving their hate-filled bile down the throats of the gullible – all of this adds up to more confusion, more division and a further fall in trust.