The US/EU trade deal TTIP is back 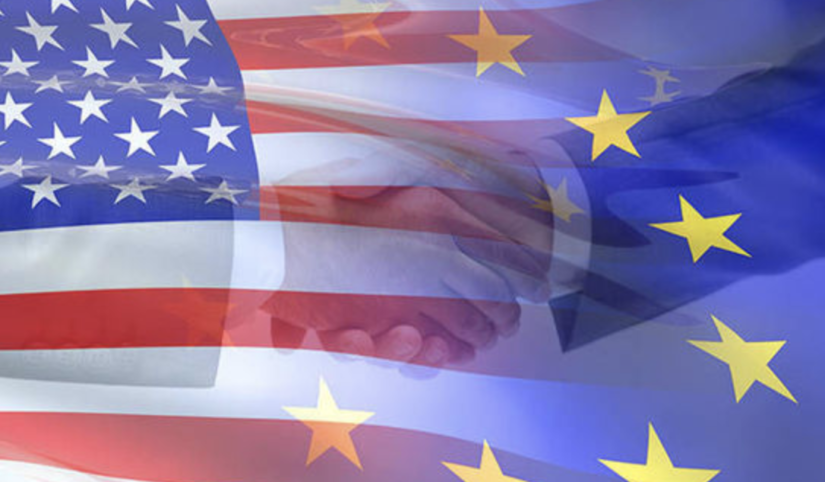 There’s a big problem with trade deals as far as Britain is concerned. The really big power brokers are America, China and the EU. Britain is now a pawn on the international chess-board of everything geopolitical. Without Britain, the EU is weaker. Without the EU, Britain is weaker – and America has spent considerable time, effort and money achieving that situation. And while Amerca is fully engaged in a trade/economic war with China to change the dynamics of wealth and power, the USA is soon to do the same to the EU. And the EU will likely blink first.

First of all, the EU is still suffering from a ‘lethargic’ economy. Its GDP today (inflation-adjusted) is the same as it was in 2010. To add much to that problem, the EU is about to lose its third-largest economic member representing something like 13 per cent of its population – courtesy of Brexit.

Anxiety is setting in. A good example of this is the emergence of TTIP v2. This is the trade deal despised by the citizens of every country in the EU – Britain included, that was ditched by Trump over two years ago. It’s a deal that opens up the EU to American corporations. And while that deal has some way to go, they are now fundamentally now fighting over just two big areas of trade – and both have to concede something to get there. If a deal is struck it will be the biggest in human history by a long, long way. GDP in the USA is currently $19.4 trillion, the EU $18.8. Combined, this equals about 60% of the world’s economy (for comparison China’s GDP is $12.2 trillion).

The excerpt below is from Corporate Europe Observatory, an organisation that focuses on corporate lobbying within the EU and what they have just unearthed is economically seismic.

As US President Trump this week reaffirmed a new EU-US trade deal as the only way to avert new punitive tariffs on EU manufactured import goods, the ongoing trade negotiations between the trading blocs are back. A new report today warns of the serious risks of such a trade agreement for public health, consumer rights and the environment.

In “Trading Away Protection” lobby watchdog Corporate Europe Observatory and the EU Office of the Austrian Chamber of Labour (AK Europa) lay out the attempts of US negotiators to launch a renewed attack on EU precautionary measures for the safety of chemicals, food and GMOs, while also explaining that EU negotiators are pushing for US acceptance of EU product approval rules, so-called conformity assessment, which have proved highly flawed in sensitive areas such as medical devices.

Following the first threats of punitive tariffs made by US President Trump last summer, EU and US negotiators have been holding talks to avert a trade war since July 2018. By now, both sides have put their demands on the table, and what has so far become public should raise the alarm for politicians, consumer groups and others who followed with concern the negotiations on the tanked Transatlantic Trade and Investment Partnership (TTIP). Many of the ‘TTIP’ worries remain valid for the current EU-US negotiations and new ones are emerging.

The new study also looks at the transparency of the negotiations so far, concluding that the level of access to information for EU decision-makers and the public have much worsened since the TTIP talks. While the EU Commission’s negotiators made sure to thoroughly consult with the business community on their negotiating stance, very little has been communicated to the public.

The issue here is simple and yet complicated. Ordinary people don’t like what America has to offer (pesticide-ridden foods, glyphosates, GMO’s, reduced working conditions, healthcare, corporate courts and much more) Government’s don’t have much choice (American threats of economic sanctions, trade wars, geopolitical exclusion and much more). Hence, the US/EU trade deal being hammered out right now is even more secretive than the original TTIP deal that saw a 97% negative response rate to the EU largest ever study of its population – which was on TTIP. Millions protested. One of the biggest was in London and the UK added half a million signatures to the EU wide protest that EU commissioners ignored.

If Britain thinks it is somehow freeing itself from all these shenanigans then it is utterly deluded. With an island population of some 66 million who are mostly against a trade deal with America – it will inevitably be forced into taking whatever comes out of TTIP 2 in terms of standards, terms and conditions. The best Britain can hope for is that the EU gets a half reasonable deal.

“The worst thing that could happen would be both sides getting their way. EU safety standards for chemicals, GMOs, pesticides, and foods would take a massive hit and the US would see some of its product approval systems undermined by a more lax European approach.

“The result could be consumers in the EU being forced to eat non-labelled gene-manipulated foods that have been treated with toxic pesticides, while patients in the US could wind up with unsafe implants. This must not be allowed to happen.

“It is provoking to see EU negotiators once again keeping their moves in the dark. There is even less transparency around the current negotiations than there was around TTIP. While the Commission is consulting in depth with European corporations, the public is not kept informed in any meaningful way.”

Valentin Wedl from the Austrian Chamber of Labour said:

“Any trade agreement must contribute to fair globalisation policies. Regrettably, current EU-US negotiations on this “TTIP light” are putting workers´, consumers´, environmental and other public interests, and especially the EU precautionary principle, at risk once more. To this end, these domains have to be clearly and unmistakably exempted from any negotiations on the scope of “conformity assessments” or any kind of “regulation cooperation”.

In other words, trade negotiations for post-Brexit Britain really hinge on what the EU and USA agree on. Once they are done, Britain can just tag along, which it would have done anyway inside the EU but without all the red tape and hassle for British business. Keep an eye on TTIP2 – it’s the next big economic battleground where the two global titans fight it out while Britain sits in the audience holding its breath.