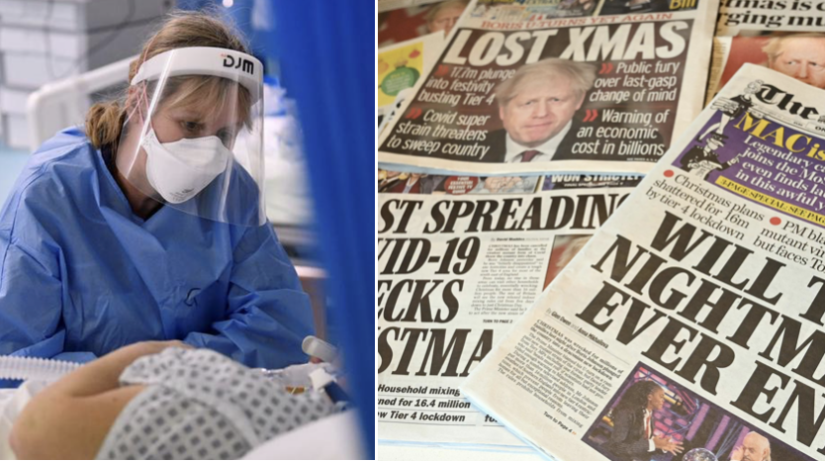 By TruePublica Editor: There are several big news stories this week that demands our attention. First, it is obvious that the current government are failing in the public health versus public relations battle. Many people are now asking the question if you get ten years for breaking travel quarantine rules, what should the sentence be for taking almost a full year to introduce them? By the end of March maybe Britain will see another grim landmark, that of 150,000 Covid related deaths – of which, many thousands can be attributed directly to the actions or inaction of this government – and more specifically to the decisions of Boris Johnson.

Then there is Brexit – the story that won’t go away (for a very long time) and one that keeps spewing out gems about government incompetence. Let’s be fair, they bulldozed through a trade agreement so thin and hard that it’s barely a trade deal. They deliberately stopped reasonable parliamentary scrutiny of it, not really knowing what they’d conjured up and hey-presto barely six weeks later it has exploded in their faces. Fishing, fashion and farming are industries that have cratered overnight. Financial services has yet to actually negotiate theirs and it’s already looking dire. Northern Ireland is up in arms (no pun intended) and exporters along with trade groups are ramping up their campaign against the government. It’s an unmitigated disaster. The government is putting a brave face on it – but from what I hear, there are many unhappy Tories at the moment because they know where this is going.

But what was anyone expecting? Everyone knew Johnson had a track record of making bold statements and walking away from expensive failures. He also has a track record of abandoning his moral duty to anyone or anything and of having no moral authority to exercise.

I get the feeling there’s a tiny bit of gloating in the remainers though that the Brexiteers did really get this wrong. Leaving aside the democratic question – leaving the EU is one thing – monumentally screwing it up is another.

For instance, the FT’s Henry Mance reports that – “JD Sports executive chairman tells Radio 4 that Brexit is costing the company “double-digit millions” and will probably lead it to move 1,000 distribution centre jobs to the EU. When asked – “Is it worse than you expected? The answer was – “Yes, considerably.”

Tom Newton Dunn at The Times reports that Michael Gove said on UK-EU relations: “When an aeroplane takes off, you sometimes get an increased level of turbulence. Eventually, the crew tell you to take your seat belts off and enjoy a gin and tonic and peanuts. We’re not at the gin and tonic and peanuts stage yet“. Gove no doubt wanted to imply a sense of Brexit ‘taking off’ with this rather puerile analogy, despite it ignoring hundreds of thousands losing jobs and carefully nurtured businesses under serious threat. He also forgot to mention, as analogies go – that we lost half our best passengers in our Brexit jet, blindfolded the pilot and disabled the landing gear for good measure!

If ever there was a piece of news that confirms what a disaster Brexit Airways really is, it is astonishing to learn that Amsterdam’s stock exchange has now overtaken that of London. As economics editor at ITV Robert Peston says – “Of course the economic significance of stock exchanges has always been exaggerated. But the idea that Amsterdam’s stock market would eclipse London never felt remotely plausible. Till we chose to leave the EU.” Amsterdam has had a 400 per cent boost since January 1st, confirming that the City of London is also one of those unfortunate Brexit Airways passengers. The FT ran with that story – no-one else did.

On Wednesday, European Commission Maros Sefcovic told Michael Gove – chief pilot of Brexit Airways, that sweeping changes to the Northern Ireland Protocol will not be possible, and that any flexibilities require the UK for its part to implement the terms of it. Basically, Sefcovic is saying Gove negotiated it, Gove wanted it, Gove pushed it – but it doesn’t work. Borders controls are not controlled. Checks are not being done, country of origin, labelling and so on is not being done. It’s yet to be determined if this can be renegotiated. Captain Gove has lost his flight path – First Officer de Pfeffel is drunk and asleep.

The leaked Tory government NHS paper indicates that over 70 accident and emergency centres will be scrapped with only 50 major hospitals remaining and more centralised government control. At the very least, this is yet another top-down reorganisation – at worst, it is a cynical manoeuvre to push through a long-held Tory ambition for the NHS – that much of what it delivers is by private, for-profit healthcare companies. Don’t forget Johnson’s claim of 40 “new” hospitals. Were these the ones he was referring to? Of course, they were – I hear you say. The other point here is that 90 per cent of constituencies in England will end up without a major hospital. Let that sink in.

Another story doing the rounds this week at a higher pitch than the week before is that of the launch of GB News due March this year. Press-Gazette reports that – “GB News, the biggest news TV channel to launch in the UK since Sky News 30 years ago, has been defended amid a campaign to get advertisers to boycott the channel by its chairman Andrew Neil.” Yes – the UK is going all USA like.

Dan Wootton, the Sun newspaper’s executive editor has become GB News’ first big on-air signing. The channel plans to air 6,500 hours a year or 18 hours a day, 7 days a week of what it deems to be “original news, opinion and debate.” Neil said it “will not be shouty, angry television” and insisted it “will conform to Ofcom rules on impartiality”. It remains to be seen but does anyone honestly think impartiality will be high on its agenda? Just wait for the launch and the complaints to Ofcom – who incidentally will soon be chaired by the Daily Mail’s Paul Dacre – the most anti-liberal commentator Britain has seen since Oswald Mosely and his merry bunch of fascists in the 1930s!

There’s an irony here isn’t there. It’s about Brexit and taking back control from foreigners. This is a “US” based “Australian” employing a “French” based “Scot” to present what is more or less government propaganda to the “English.” It’s divisive stuff, isn’t it?

There’s also another angle to this story. Rupert Murdoch’s British and American editors and execs of News Corp have had meetings with ministers 40 times in first 14 months of the Johnson government. The whole idea that the BBC chair and the Ofcom chair – (both stooges for the Tory government) and that GB News and Murdoch are not all related is a fantasy. The Boris Johnson government are now stepping up their propaganda game. By mid-year, much of the national narrative will be co-ordinated, not independent.

It is clear from the Covid-19 outcome in Britain, that when it came to the deaths of people, businesses and livelihoods that the public health battle has been lost … and now cynically, it’s all about public relations. And on the subject of PR – Downing Street confirms that three PR photographers are now usefully employed to work in No10, paid for by shaking the taxpayer money tree. They take positive images of the PM and the staff, and spent last Wednesday morning snapping Dilyn the dog romping in the garden snow. Previous PMs used media photographers free of charge, so why can’t this one?

Never far away from the public relations disaster is the world-beating skill of this government when it comes to corruption. How about the absolutely extraordinary costs of £500-£600,000 of hard-earned taxpayers cash being claimed by the  Government in respect of a one-day judicial review defending itself on a contract awarded by Dominic Cummings to his friends worth £564,000. The contract was given to spend on focus-groups to determine the government’s Covid messaging – which has been dire. This is the stuff that boils the blood of decent, honest people.

Hot on the heels of that story comes another. It’s a familiar one though. A firm owned by a family associate of Health and Social Care Secretary Matt Hancock was awarded a Government contract for the supply of personal protective equipment (PPE) worth £14.4 million. It’s a company that been trading for about a year, has one director, no website and has more links to horse racing than saving the lives of medics.

Earlier this week, we heard from Dido – the poster girl of corporate failure. Test and Trace, which she is woefully attempting to manage, has been accused of relying on “dodgy” statistics to justify its £22bn budget after it emerged the service is claiming credit for anyone at all who simply stays at home with Covid – advised or otherwise. One NHS source described the R impact calculation as “mad”, while a senior academic said it was “just bollocks”. More PR needed over here, please.

Lastly, there’s an interesting story about the former lead psychologist of Cambridge Analytica – the notorious digital analytics firm which disseminated fake news on behalf of the Brexit and Donald Trump election campaigns – who is advising some of the leading pandemic disinformation platforms in Britain. If somehow you can get 10 years at Her Majesty’s pleasure at Belmarsh for filling out a form incorrectly (deliberately or otherwise) at Heathrow, is it right that this moron should get life with the key thrown away? Perhaps Priti Patel could do something to show the world Britain is not afraid of the Yanks – a prisoner exchange – this idiot for Julian Assange. Sadly, a bit like Dilyn – Britain is still a PR lapdog.

You would think that was the roundup for a year – sadly that’s it for this week!