Hillary Clinton Accused of Racketeering by the FBI

By Prof Michel Chossudovsky – In a recent release, the FBI has indicated that it will be presenting a recommendation to Loretta Lynch, Attorney General of the Department of Justice:

“James Comey and The FBI will present a recommendation to Loretta Lynch, Attorney General of the Department of Justice, that includes a cogent argument that the Clinton Foundation is an ongoing criminal enterprise engaged in money laundering and soliciting bribes in exchange for political, policy and legislative favors to individuals, corporations and even governments both foreign and domestic.”  (Frank Huguenard, Global Research, May 30, 2016)

There are several possible scenarios which affect the outcome of the presidential campaign.

The fundamental question is whether this recommendation –which documents the criminal undertakings of the Clinton Foundation– will be carried out by the Attorney General.

Loretta Lynch was appointed Attorney General by president Obama in 2010 during his first term. Of significance, Lynch also held the position of U.S. attorney for the Eastern District of New York under the Bill Clinton administration (1999-2001).

Moreover, as pointed out in a recent article by Jerome Corsi, Loretta Lynch is political crony of the Clintons:

But little known is the fact that Lynch was a litigation partner for eight years at a major Washington law firm that served the Clintons.

Lynch was with the Washington-headquartered international law firm Hogan & Hartson LLP from March 2002 through April 2010.

In addition, Hogan & Hartson in Virginia filed a patent trademark request on May 19, 2004, for Denver-based MX Logic Inc., the computer software firm that developed the email encryption system used to manage Clinton’s private email server beginning in July 2013. A tech expert has observed that employees of MX Logic could have had access to all the emails that went through her account.

It is, therefore, highly unlikely that Lynch will follow the recommendation of James Comey and the FBI.

Nonetheless, even if the indictment is NOT carried out, inevitably Hillary Clinton’s “credibility” as a presidential candidate is in jeopardy.

The corporate media may attempt to cover up or distort the findings of the FBI and manipulate public opinion with a view to supporting Hillary’s candidacy.

A process of smearing the FBI is already ongoing. Will it  succeed? Hillary’s reputation has been tainted. A suspected criminal cannot become president of the USA, whether the legal procedure against her is carried out or not.

And the Donald Trump campaign will go into high gear to discredit Hillary Clinton.

Under these circumstances, the Democratic Party hierarchy (not to mention Hillary’s corporate sponsors) may decide to dump Hillary Clinton. Hillary’s Wall Street cronies will not bet their money on a “losing horse”.

Assuming Clinton falls out of the presidential race, what happens?

This scenario has already been contemplated and carefully rehearsed ahead of Hillary’s demise.

Will the nomination go to Bernie Sanders or will Joe Biden formally enter the race as a “slip in” candidate:

If Clinton’s email-related problems get worse or other developments sink her popularity far below even Trump’s, causing her to step aside, Biden, as a more establishment figure than Sanders, would be the party’s likely choice as a “slip-in” candidate and an almost certain winner against Trump.Notwithstanding these various scenarios, Donald Trump is ahead in the presidential race. (Chicago Tribune, May 27, 2016) 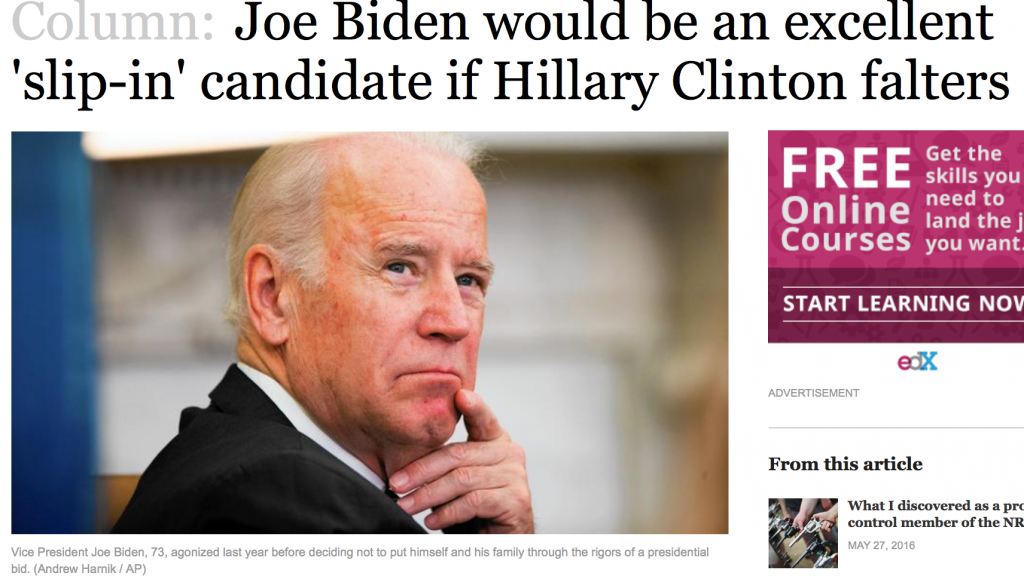 The Criminalization of Politics

While Hillary, according to the FBI, is allegedly involved in money laundering and soliciting bribes, Donald Trump’s candidacy is also fragile, given his alleged links to organized crime as documented by David Cay Johnston:

But Trump was not clean as a whistle. Beginning three years earlier, he’d hired mobbed-up firms to erect Trump Tower and his Trump Plaza apartment building in Manhattan, including buying ostensibly overpriced concrete from a company controlled by mafia chieftains Anthony “Fat Tony” Salerno and Paul Castellano. That story eventually came out in a federal investigation, which also concluded that in a construction industry saturated with mob influence, the Trump Plaza apartment building most likely benefited from connections to racketeering. Trump also failed to disclose that he was under investigation by a grand jury directed by the U.S. attorney in Brooklyn, who wanted to learn how Trump obtained an option to buy the Penn Central railroad yards on the West Side of Manhattan.

Why did Trump get his casino license anyway? Why didn’t investigators look any harder? And how deep did his connections to criminals really go? (Politico, May 22, 2016)

Dirty politics. So much for Democracy and “We the People”.

The Criminalization of Politics in America: The leading presidential candidates, Hillary and Donald, have shaky records, with alleged links to criminal wrongdoings.