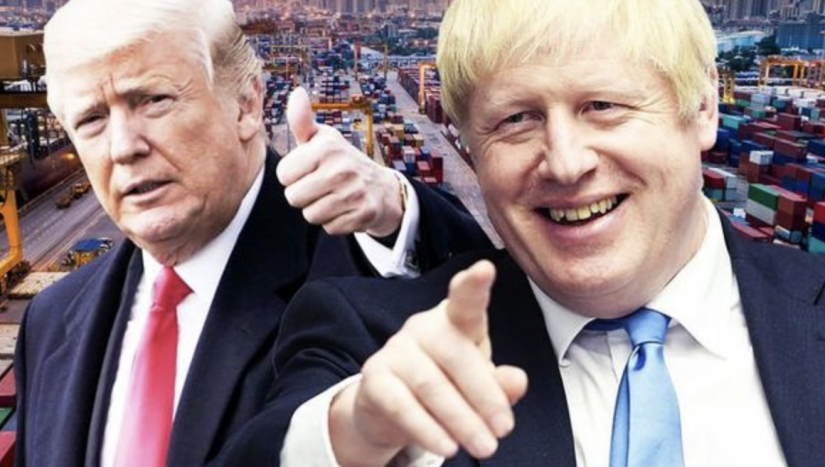 By TruePublica: After yet more failed talks with EU leaders over the backstop for Northern Ireland in New York while attending the UN summit, Boris Johnson took the opportunity to sell to America what Britain will be offering them in a no-deal post-Brexit world.

Downing Street billed this speech as a major announcement of intention, all of which will be set out this morning as Boris Johnson is to address US business people in the city’s plush Hudson Yards district.

According to extracts of the speech released in advance, Johnson will promise that a post-Brexit UK would “roll out the red carpet” for US businesses, with “the most competitive tax rates and the best-skilled workforce in the hemisphere”.

“As we come out of the EU we are going up a gear,” he is due to say. “We are going to take advantage of all the freedoms that Brexit can give, whether that is new tax allowances for investment or speeding up public procurement contracts.”

In a round of TV interviews in New York, Johnson had already given some examples, where the UK will be diverging from EU regulations, around areas such as financial services or biotechnology, “where we want to do things different”.

He told Channel 4 News: “To give you another example, it may be that we want, for instance, to take advantage of tax freedoms to allow companies to invest more in capital and plant. We may want to do free ports in the UK to drive up economic growth in areas that have fallen behind.”

To all intents and purposes, Britain is swapping a trade deal with the EU for a trade deal with America. The former has around 500 million people in 27 states, the latter 327 million in 50 states – both in single regulatory systems. The former has a GDP of $18.8 trillion, the latter $19.3 trillion. Britain currently exports around $300 billion to the EU and $110 billion to the USA.

However, a trade deal with America is calculated to increase the UK’s GDP by less than 0.25%, while opening up the nation to US businesses by lowering standards that are currently enforced by the EU. Many have forgotten the animosity generated by the US/EU TTIP trade deal just two years ago where British opposition included petitions exceeding half a million signatures and hundreds of thousands of protestors on the streets joining millions across Europe opposing it precisely because of the lowering of standards.

Boris Johnson’s carefully chosen words give rise to some alarm as rolling out the red carpet means special concessions for American business. It brings back the much-hated TTIP deal in different clothes, but very much tilted towards America’s advantage.

The tax rate on company profits is already expected to be cut from its current level of 19% to just 17% by the end of next year. One of the reasons for the decade long austerity drive was because the UK already had one of the lowest corporation tax rates in the developed world. The Conservative government made the case that revenue had fallen as a result of the bank-led financial crisis and therefore government expenditure had to be reigned in. This latest move to reduce corporation tax will cause the treasury to lose another £6.2billion in revenue that will not be generated by leaving the EU or opening up trade to the rest of the world.

Leaks from UK/US trade deal talks have hinted that America will be given special privileges when it comes to the free movement of people – although quite how that would work is not known. The advantage of swapping a French, Spanish or Polish accent for an American one is equal to nil anyway.

Mentioning the ‘speeding up of public procurement contracts’ is also to be of concern. What does that even mean? The NHS, national infrastructure projects? And the thought that the City of London could be unleashed from an already loose regulatory system that has catastrophically caused so much damage to the UK is frightening. The same goes for biotechnology, which is deliberately restrained for all sorts of moral and ethical reasons by the EU – and quite rightly so.

Johnson has once again pushed the idea of ‘free-ports’ – a nice sounding policy idea that in reality not even Margaret Thatcher approved of as they create little more than the criminal’s playground for counterfeit goods, that by nature do not attract tax revenues. Thatcher even tried it and the project economically failed as on average, one additional job in Thatcher’s “enterprise zones” cost the public purse over £31,000 in today’s prices.

From our report incorporating the work of Tax Justice Network, came these words describing exactly what a freeport really is: “Ironically, one of the main reasons freeports don’t yield any significant benefits to a country’s economy is because they don’t operate as ‘ports’ at all. Whereas the term freeports may conjure images of bustling seaside towns brimming with commercial cargo ships and towering stacks of containers full of goods ready to be traded free from the oppression of bureaucrats and tax collectors, in reality freeports take the form of large, fortress-like warehouses with long, eerily quiet rows of unlabelled storage units holding unknown assets belonging to unnamed individuals. It would be more accurate to refer to freeports as “free self-storage” for the ultra-rich.”

When Boris Johnson says things will be different, they will be – a la Singapore.