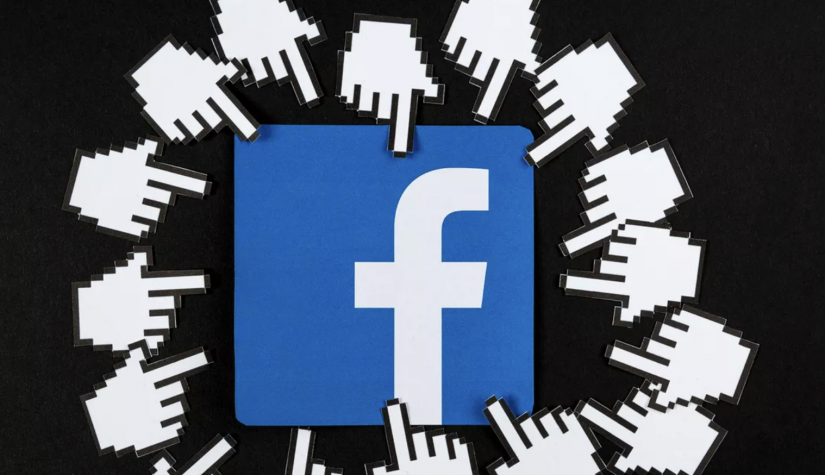 By TruePublica: Boris Johnson was advised by Lynton Crosby throughout his Tory leadership race. As far back as 2013, Crosby has been a controversial figure to the Conservative party. There was a concern then that he influenced government policy in favour of his company’s clients. He got the Tories to dump plain packaging on cigarettes and curbed restrictions on alcohol. Through his business activities, Crosby has been seen as an enemy to those who advocate for the rights of asylum seekers, indigenous people, women seeking abortions and gay marriage activists. He was found to have been lobbying for the Australian Petroleum Production and Exploration Association, which promotes fracking. Since Crosby became Tory election strategist in 2012, the government then dished out tax breaks for the oil and gas industry. Fracking opponents alleged a link at the time and is now accused of using Cambridge Analytica style campaigns to the results the Tories wants.

It was because of his marketing methods, it could be argued that Crosby has helped to push politics in the western world to the right. Indeed, it was Crosby who not only created Theresa May’s ‘strong and stable’ mantra but was also the architect of the plan to kill off Theresa May’s Chequers plan and then install Boris Johnson.

Since then, Sir Lynton Crosby’s lobbying firm (a close ally of Boris Johnson) called CTF Partners has since been found out to have secretly built a network of unbranded “news” pages on Facebook.

In the most complete account yet of CTF outlook and strategy, current and former employees of the campaign consultancy have painted a picture of a business that appears to have professionalised online disinformation campaigns built into the structure of political campaigning.

The result is that Crosby could be called to give evidence to a House of Commons select committee on disinformation after the Guardian revealed how his lobbying company, CTF Partners, was involved in running a propaganda network on Facebook on behalf of foreign states and major corporate clients.

MPs told the Guardian they would seek to summon representatives of CTF to discuss their role in running a disinformation network that reached tens of millions of people. It comes as trade groups seek to distance themselves from CTF and its activities.

Select committee member Jo Stevens said she would be looking to summon Crosby himself to give evidence, comparing his company’s tactics to those used by the defunct business Cambridge Analytica.

“The parallels between the types of work SCL Group and Cambridge Analytica did and Lynton Crosby’s CTF are unnerving,” she said. “Crosby appears to be something of an expert in fake news and disinformation so evidence from him would be very helpful to our ongoing inquiry.”

These disclosures could raise pressure on Boris Johnson and his team to distance himself from CTF, with former staff members warning that the company might wield substantial influence in the new administration as it did in David Cameron’s unexpectedly short-lived career.

CTF gave Johnson an interest-free loan to cover office and staffing costs earlier this year, while Crosby’s partners in the business are Mark Textor and Mark Fullbrook, with Fullbrook taking a leave of absence to run Johnson’s campaign for the Tory party leadership along with David Canzini (another deeply involved in the hard-Brexit campaign to exit the EU).

The news that Crosby is using Cambridge Analytica strategies follows on from the Guardian’s April report that Crosby’s company was behind a series of hugely influential pro-Brexit Facebook groups, which spent as much as £1m seeding the idea of a no-deal exit from the EU in the minds of the British public.

The company’s approach is a sophisticated application of a communications technique called astroturfing. This is where political campaigners attempt to create the perception of an upswell of grassroots support for a cause. Brexit and its many so-called grassroots campaigns featured heavily.

One former employee described to The Guardian how Crosby’s business created Facebook pages on specific topics to spread disinformation. The £1m campaign was specifically found to be promoting sophisticated targeted micro-ads aimed at heaping pressure on individual MPs to vote for a hard Brexit, which of course, promoted Boris Johnson’s hard-Brexit promises. Emails flooded MPs’ inboxes with calls to reject Theresa May’s deal.

Leaked documents showed, almost all of the major pro-Brexit Facebook “grassroots” advertising campaigns in the UK share the same page admins or advertisers. These individuals include employees of CTF Partners and the political director of Boris Johnson’s campaigns to be mayor of London, who has worked closely with Crosby in the past.

The collective Facebook expenditure to push for a hard Brexit swamped the amount spent in the previous six months by all the UK’s major political parties and the UK government combined. 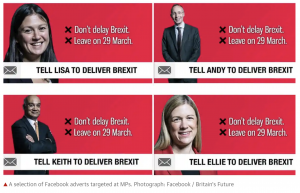 It should come as no surprise then that Conservative Campaign Headquarters have also just been found to have spent an eye-watering £25,000 of taxpayers money on micro-targeting Facebook ads aimed at people who are afraid of rising crime in their neighbourhoods. Eye-watering because just £50 buys at least 10,000 targeted hits when using Facebook, so £25,000 could easily reach 5 million people.

Its purpose was to scoop up users data and grab more votes from a fear campaign. These are similar tactics being used in the Cambridge Analytica scandal and the main reason why Facebook has faced criticisms and accusations all over the western world for its practices.

TotalPolitics reports that – “Conservative Campaign Headquarters have already spent £25,270 on a slick Facebook ad campaign to “get your thoughts” about their plans to hire an extra 20,000 police officers. The ads say:

Interested members of the public are sent over to a new “police locator” website where they are urged to hand over their personal information, including their full name and postcode, so they can “let Boris Johnson know” that they’d like more bobbies on the beat in their neighbourhood.

The campaign has already been deployed in over 2,000 different ways, either by varying the ad’s content or sending particular versions to micro-targeted groups to monitor the response.

It should be noted at this point that the British government understands that this type of information manipulation was classed as a ‘weapons-grade communication system’ developed to change hearts and minds in battlefield zones by SCL Elections. They were at the very heart of the Cambridge Analytica/Facebook scandal that has rocked democracies all over the world and influenced Brexit. SCL’s client list included, amongst others, the British and American armed forces, special forces and NATO – or the purposes of delivering ‘communication warfare’.

A quick scan of the Conservative police campaign privacy policy makes it clear what their plan is for the data.

“We collect data with the intention of using it primarily for political activities. The Conservative Party uses the data that we collect about you in order to build a picture of you and the United Kingdom electorate. We use automated means to analyse this variety of data and collate it (referred to as “profiling”).” This profile can then be used to “select what campaigning material we send to you and which messages they put on it.”

When asked how the data would be used to inform the new policing policy, a party spokesperson told TotalPolitics without any apparent concern over previous privacy/election/referendum scandals that: “This is normal practice and part of ongoing digital activity that CCHQ undertakes throughout the year.”

Given the scale of political micro-targeting ad scandals involving not just Cambridge Analytica and Facebook, but American billionaires funnelling $millions through front charities and think tanks to usurp democracy via the use of military-style campaigns against a civilian population – you’d think the British government would at least attempt to use properly legal campaigning techniques. The fact that they are not using Cambridge Analytica does not mean to say they are not using the same information harvesting systems and online tactical strategies to achieve the same desired results.

However, all this comes hot on the heels of a new development in the high court this week. The government have just been given the go-ahead by the highest court in the land to do whatever it likes when it comes to citizen data. And that even includes losing ‘haystacks’ of mass data, when MI5 admitted to the court in a battle with Liberty over the Investigatory Powers Act that it had in fact done just that. The court even acknowledged that MI5 were found to have used “extraordinary and persistent illegality‘ in their actions. However, unlike any other entity – MI5 won’t be fined – and are not really accountable anyway.

The courts gave the government carte blanche to ride roughshod over privacy laws with few legal protections or boundaries with which it can operate. This was not just a case about mass surveillance powers breaching human rights. It was also about so much more. Journalists sources are no longer protected and now the civilian population can be subjected to all manner of aggressive political targeting by its own government without its knowledge.

So hoovering up everyone’s data and manipulating swing voters is now not to be considered even immoral let alone illegal – as far as the courts are concerned. Three times the IPA has lost privacy battles in the highest courts in the UK and EU. One hearing in the Johnson era – and a green light is given.

Martin Chamberlain QC, representing Liberty, warned against “the possibility of abuse of power necessarily exercised in secret, and the generally chilling effect on individuals’ communications and expression of ideas is caused by the existence of such powers”.

As Liberty-Human Rights says – “The UK’s Investigatory Powers Act is the most intrusive surveillance law ever introduced in a democratic country.”

We can now pair that up with a government that now uses military/warfare grade communication systems much as Cambridge Analytica did against the civilian population of Britain to ensure it gets the political results it wants. The British government have been found in court to have created the greatest invasion of individuals’ privacy in the Western world and it hardly even reached any headlines of the mainstream media.