The American culture war warriors being installed in Britain 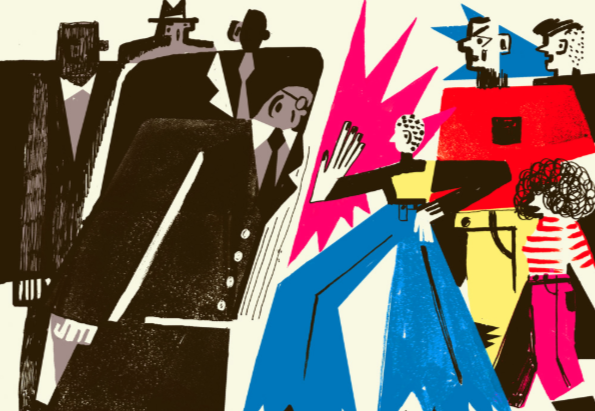 By TruePublica: The very worst of American style politics along with an aggressive form of culture wars distorting Britain’s social norms has arrived. There is now plenty of evidence of American ‘conservatives’ exporting their warriors, that we would consider to be little more than extremists, fundamentalists and holy crusaders from the New World – and they are striking while the Brexit moment gives them oxygen.

Culture, customs, language, society, manners, etiquette and values. These are just some of the words that help to describe Gt. Britain as it was. Today these words seem antiquated – irrelevant even.

In recent years, the emergence of project fear, scare tactics, misinformation, propaganda and fake news that littered the most recent political campaign trails is merely scratching the surface of what is coming next. And whilst we should come to expect that to a certain degree, Britain’s traditional calm ways of dealing with its modern day culture and social norms is about to see a transformation from respect and dignity to the downright dirty.

Since the many scandals surrounding Britain’s EU referendum have emerged, the National Crime Agency, Electoral Commission and the police are attempting to trace those responsible. But now, ‘dark-money’ – part of the lexicon of today’s political landscape – is starting to infect every national discussion of importance.

The thing is, you won’t really know what is going on because this serious intervention into Britain’s way of life isn’t always that visible. As an individual you might not be interested in many things that you take for granted, that are actually a part of British life that is currently under attack by right-wing American ‘conservatism’ … as they like to call it.

In America, the use of different strategies for social change are numerous. One such tactic known in political daily life over there is something known as ‘opposition research.’ It’s an organisation that provides reporters and social media platforms with the dirt no matter how old, obscure or conjectural about the opposition. Facebook were themselves mired in yet another scandal – they used this same ‘opposition research’ or ‘attack dog’ approach to besmirch their opponents and critics just as Trump did more widely in his own campaign.

From a SpinWatchUK investigation comes the story that a Republican political attack operation has set up shop in Britain and is being filled with influential or experienced Conservative party activists as they seek to stem their own demise through sheer nastiness and spite. They are already using this American style of politics, which is funded by secretive extreme right-wing free-market agitators and fundamentalists from the USA. It is well worth the read I assure you.

In the meantime,  openDemocracy reports from an investigation of theirs that an American anti-LGBT campaign group’ – an organisation that is officially listed in America as a ‘hate group’ – with close ties to the Trump administration has spent more than £410,000 in the UK since opening its doors.

“ADF International – opposes abortion rights and same-sex marriage equality – is also connected to a small number of British campaigners behind supposedly ‘grassroots’ movements against assisted dying, new research has found. The global wing of the Alliance Defending Freedom (ADF) has a multi-million dollar budget but does not disclose who its funders are. It opened an office in London two years ago and is now spending hundreds of thousands in the UK. Recently, this group has publicly opposed ‘buffer zones’ around British abortion clinics and supported calls for “freedom of conscience” provisions to enable medical staff to independently object to providing legal abortion services.”

Exposed in this report is also a network of closely-linked ‘anti-choice’ campaigners that have targeted the Royal College of Physicians.

“It is really worrying that a well-funded, socially conservative, pro-life organisation based in the US is planning to intervene in the assisted dying debate in the UK”, said Thomas Davies, the author of the report published by the group Dignity in Dying.“Dying is hard enough without it becoming a new front in the culture wars”, he said.

The Southern Poverty Law Center (SPLC), which monitors extremists in America, has described the ADF as an anti-LGBT hate group that has “become one of the most influential groups informing the Trump administration’s attack on LGBT rights”.

The American group refers to its donors as its “ministry friends” and describes donations in religious terms, as “sacrificial contributions”. In Britain, we call it ‘dark-money’ because the money comes from undisclosed sources.

ADF is seen as the most organized and influential Christian legal interest group in America. In 2016, the Southern Poverty Law Center not only listed the organization as an anti-LGBTQ hate group but put them on a list that includes the Ku Klux Klan, and neo-nazi groups.

In the last two years, The ADF has intervened in multiple religious discrimination cases in Britain and since Britain’s EU referendum, the ADF has set up its operations locally to fight for ‘free-speech’ – the same free-speech espoused by Tommy Robinson and assisted in his so-called ‘free-speech’ legal cases.

DeSmog UK reports that the US leaders of a scandal-hit American student movement are touring the UK this week, following the launch of a British branch of the organisation last month. Yes, they’ve opened a branch in Britain in expectation of a deregulated post-Brexit Britain.

“They advocate climate science denial, “free markets and limited government” and have numerous links to the fossil fuel industry. They also have links to Donald Trump. Turning Point claims to have a presence on more than 1,300 college campuses and high schools, engaging in “over 500,000 face-to-face conversations with college students each semester.” The scandal-hit group has been plagued by incidents of racism and allegations of illegal campaign spending since its launch, with its “professor watchlist” accused of stymying academic freedom.”

The group received support from a number of Conservative MPs including Priti Patel and climate science denier Jacob Rees-Mogg, in addition to other right-wing politicians such as former UKIP leader, Nigel Farage.

There are close links with the group’s leader George Farmer and people such as the UK’s Paul Joseph Watson, senior editor at conspiracy theory website Infowars. Darren Grimes is another connection. He was recently prosecuted and fined £20,000 for running illegal pro-Brexit campaigns with hundreds of thousands in ‘dark-money’ ads and now under police investigation.

This is just one of the very many cases exposed recently in Britain. The IEA, a think tank behind the pro-US free trade plan launched by leading Brexiteers went on a “lucrative” American tour to raise money for its Brexit work. This report comes from an investigation by Unearthed Greenpeace and exposed the Institute for Economic Affairs tactics in ‘influencing’ the Brexit debate. The point here is that very serious ‘influence’ is coming from a foreign state – America.

The investigation showed the IEA offering to broker access to senior ministers for an undercover reporter posing as representative of US agribusiness investors. IEA director Mark Littlewood said the think tank, which is registered as an educational charity, was in the “Brexit influencing game”.

The trip included stops at conservative think tanks with links to “dark money” donors who have pumped millions of dollars into climate scepticism and other libertarian causes.

The IEA has an established US fundraising arm, American Friends of the IEA, which has funnelled $hundreds of thousands donated in the US to support the UK think tank’s work. And that sum is probably scratching the surface of US money donated to usurp British democracy and change society in a grab to profit from the ensuing deregulation and festival of chaos.

In years gone by, this would have caused a national outcry, no different to the 2009 ‘Cash for Influence‘ scandal that caused political suspensions, which were the first since Oliver Cromwell’s era in the 1640s. Today, the IEA and the politicians involved got no more than a slap on the wrist warning for doing the same.

To give another example, the Ireland referendum on whether to repeal the Eighth Amendment to the constitution – which places the right to life of an unborn child on equal footing with that of the mother – saw American campaigners travelling to Ireland and being, let’s say, confrontational in their tactics.

Colorado-based anti-abortion group Let Them Live travelled to Ireland leading up to the historic poll to “sway the voters to vote pro-life and keep Ireland pro-life.”

Associated with it is The Leadership Institute. It is a decades-old multi-million dollar nonprofit that trains young conservative activists and policy leaders to sell right-wing ideals on limited government, the free market, traditional values, and national defence.

Under Irish law, foreign citizens and groups are not allowed to make any financial donations to Irish campaign groups but that didn’t stop online campaigns, funded with ‘dark-money’ to attack Ireland’s referendum through American tech Co’s.

Many Irish were outraged by foreign groups like Let Them Live, arguing that American campaigners were staging a proxy war on women’s rights in their country. Ireland’s Health Minister warned about a “fog” of misinformation from the USA that was being used to “conflate” and “confuse” voters.

In the US, groups with connections to far right-wing organisations such as these often claim to have free-market ideals but in reality, they are little more than highly sophisticated lobbying outfits, being orchestrated to promote the desired results of the people who fund them in the first place. It’s a hands-off thing. They don’t want their names linked to underhand and the often illegal tactics being used.

The examples given above merely scratch the surface of what is happening right now. This is Britain’s public discourse being distorted on important areas such as freedom, democracy and tolerance by a foreign state power who have no business installing their world vision into the British way of life like some sort of cultural re-boot.

America is a world-class polarizer in every sense. It is used to turning normal daily life into the ferocious politicisation battle of just about everything. They have a way with a ritual airing of their grievances and before you know it everything is being transformed into a tribal shirts-and-skins identity issue of some sort.

Where will it get us? These new forms of political warfare and the culture conflict zones it creates will be driven by knee-jerk emotional battlegrounds. It will inevitably and quite dramatically increase the danger that thoughtless short-term choices of the long-term national trajectory. On only has to look at Brexit to see exactly how a thoughtless self-centred, inward thinking political imbecile thought he could settle a 40-year political conflict between the right and radical right.

And whilst we all accept that the two main political parties in Britain are mutually disdainful, with each tribe deploying the increasingly shrill and furious language of recrimination, their latest strategies are now openly spilling onto new public battlefields. There is an emerging cultural war being filled with its own warriors – they are extremists, fundamentalists and holy crusaders from the New World.