The unCIVIL War of a proROGUE state 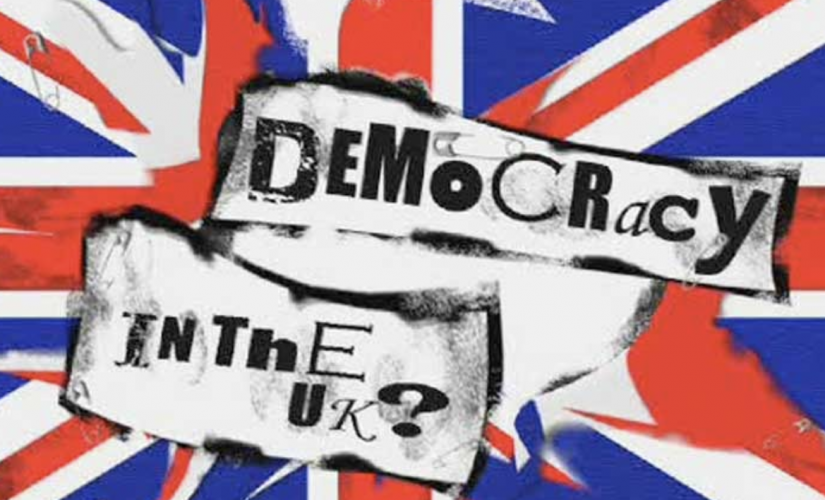 By Graham Vanbergen: I’ve been warning about this for a few years now. Authoritarianism in Britain is now the new norm and people are not calling out for what it really is.

Britain, exuding all the pomposity of a tolerant, strong and stable government – with a monarchy, army, navy and civil service steeped in centuries-long stiff upper lipped traditions has had its pedigree finally cast aside by an unelected leader to reveal a mongrel mind with personal ambition, funded by aggressive hedge funds, to push the country into a do or die battle to the end.

No-one voted for this, including all those who voted for Brexit. They voted for a sovereign parliament to take back control, and there was no mention back in 2016 of a no-deal Brexit, suspending democracy and putting the army on the streets to protect citizens from themselves.

So what control does Britain now have? Today, Britain has a party leader elected by 0.3% of the population who is only in power because they bribed (with £10bn of taxpayers money) the DUP, themselves supported by a group of known terrorists – and want to suspend parliament to force through the will of 37% of the people. In reality, it’s worse than that because for Boris Johnson – taking back control means something entirely different – all this is for his control. You the voter now have no control. Johnson has suspended parliament because he was facing the potential of a vote of no confidence or a general election that was not in his control. In the meantime, all the other control is in the hands of the EU and if that fails it will then be in the hands of a trade deal with Trump – handing him control of everything else. That is the end game.

Brexit is an unmitigated disaster. The economy is now heading southwards, inward investment has collapsed, Britain is internationally sidelined, huge corporations are turning their backs as their billions need strong and stable business environments. Sterling has crashed – it’s an inch from its worst-ever performance since the days when Thatcher was elected. This is not ‘project fear’ – this is happening – its a fact.

This unprecedented move by Johnson is an astonishing attempt to whittle away democracy. We have a Prime Minister who has only spent one day in the House of Commons and after five weeks away, he will face them for just four working days before banishing them for a further five weeks – itself unprecedented. The political pundits are saying don’t panic – parliament still has a week to resist. They’ve had over three years and here we are.

And you know what’s next in this uncivil war. Bob Kerslake, former head of the civil service, was asked where their duty lies in this unprecedented situation. And guess what he said – “We are reaching the point where the civil service must consider putting its stewardship of the country ahead of service to the government of the day.” One wonders what Mark Sedwill, the current head of the civil service, is thinking – or indeed any of his seniors. Would any of them not be considering the democratic validity of a no-deal Brexit without parliamentary consent that they are supposed to deliver?

Think about that for a moment. The civil service could rise up against the state. Kerslake has given his public approval to Sedwell to do so.

And as for the rogue state. A British general, who served in Northern Ireland during the Troubles said – “The Army just wouldn’t stand for it. The general staff would not allow a prime minister to jeopardise the security of this country and I think people would use whatever means possible, fair or foul to prevent that. You can’t put a maverick in charge of a country’s security.” That unnamed general was speaking back in 2015 with the prospect of having Jeremy Corbyn as the Prime Minister. Forget Corbyn – would the army generals stand today with Boris Johnson and the Tory party who now pose a hugely increased threat to national security, economic security and even food security. The head of MI5 is focusing on far-right terrorists in England and now has a third of operational staff in Ireland waiting for that to kick off. The first bomb blasts are already ringing in their ears. 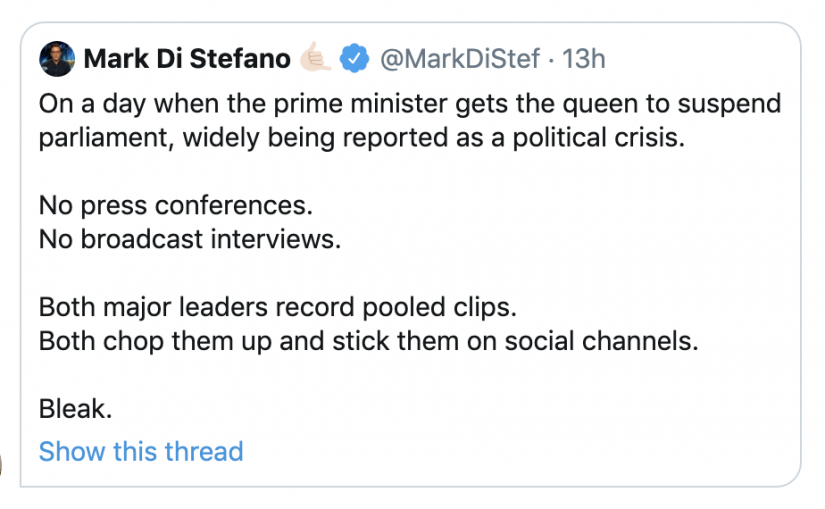 Mark Di Stefano – Media and Politics Reporter at BuzzFeed UK reports, just as we have done at TruePublica that straight after the announcement that Johnson is suspending parliament, press conferences, interviews and any commentary from the Tories have also been suspended.

We have followed how the Johnson media machine is controlling the national narrative by banning journalists from even asking questions, let alone filming any responses.

Britain’s media is being censored – gagged – by an unelected leader.

In an attempt to calm the country and continue to use bribes to force through their agenda – the chancellors spending review, due next week, will be hailed as a change of political direction.

That change of direction will be a narrative aimed at reversing the damage the Tory’s have done over the last decade. Services on the edge of collapse like the NHS will be the tool of national bribery. They will shake the money tree and the compliant media on the right will hail their new Caesar. This will be a spending round immersed in sarcasm with counterfeit commitments to overhaul a failed ideology that led us exactly to where we are. Don’t be conned by their shiny coin – they are offering nothing but fool’s gold.

Dominic Cummings, Johnson’s puppet master told The Times last week all we need to know about where Britain is heading. “I’m (now) going to go and meet billionaire hedge fund managers and get a giant pot of cash from them to build an election war chest of unfathomable depth.” October 17th is apparently earmarked for operation general election.

This is a coup d’etat. I wrote a book on it – and that alone. I didn’t go into the semantics – I focused on corporations, hedge funds and criminal money.

Boris Johnson has deliberately neutered representative democracy so that hedge funds, vulture funds and the corporations from his birth country, a country he loves more than Britain can come and devour what is left of the corpse of a fallen empire. The sunny uplands they promised is fake – just as democracy is now shown to becoming.

Last week I wrote an article for TruePublica which was published on Sunday. It posed the question – was it possible that Britain could end up as a failed state. Yesterday I was asked by a German newspaper if they could translate and republish it and then this morning by Russian and French outlets. The European Financial Review has published another I wrote about the foreign alliance taking over Britain. This article became a most-read article in 18 hours. For me, it’s obvious what is going on.

There are just a few days left for Britain’s elected representatives to act and defend the principles of democracy. If a no-deal Brexit is dragged through, that will signify the end of the rule of law in Britain. But don’t take my word for it.

Raphael Hogarth, a respected political commentator, writes for The Times and is an Associate for the Institute of Government thinks Britain is heading for state failure. “If (Johnson) maintained his commitment to take the UK out of the EU without a deal on 31st October,  “come what may,” “do or die,” ignoring the letter of the statute or even a court judgment clarifying it for him, then that would be the end of the rule of law in this country. It is no exaggeration to say that the United Kingdom would have become a failed state.”

A  no-deal Brexit is not honouring the referendum result. It is honouring the promises made to the billionaires that funded the Tories.

And as for those all-so-easy Brexit trade deals we were promised? After three years of negotiating – if this is all we have, the country’s economy is sunk, probably for at the most charitable of estimates – at least a decade. This is lost wealth. This is wealth that cannot be returned. Britain’s youth will pay the price very much more than those most easily able to weather the storm. It was the ‘silent generation’ and the ‘baby boomers’ – now retired, who took advantage of a strong and stable nation, built their wealth and put Brexit and then Johnson ahead of the national interest of their children and grandchildren – all for the fake promises of bankers offering fool’s gold.

Something else I wrote about exactly one year ago this month entitled – Brexit: The Great Con That Will Ruin Britain.   “far from being the result of representative democracy, this is in fact, a campaign of covert intervention by foreign billionaires to bring about economic chaos in Britain in order to create the circumstances for making huge profits. This is not the stuff of mere conspiracy theories. Clear evidence has emerged that Brexit was engineered and is already proving to be a catastrophe.”

The next 63 days – until October 31st will be critical in so many respects. Whatever happens, recovery will take a lifetime and so will the social scarring it leaves.

Graham Vanbergen is the editor of TruePublica, a columnist for The European Financial Review and author of Brexit: A Corporate Coup D’Etat (Download to any device £2.99)