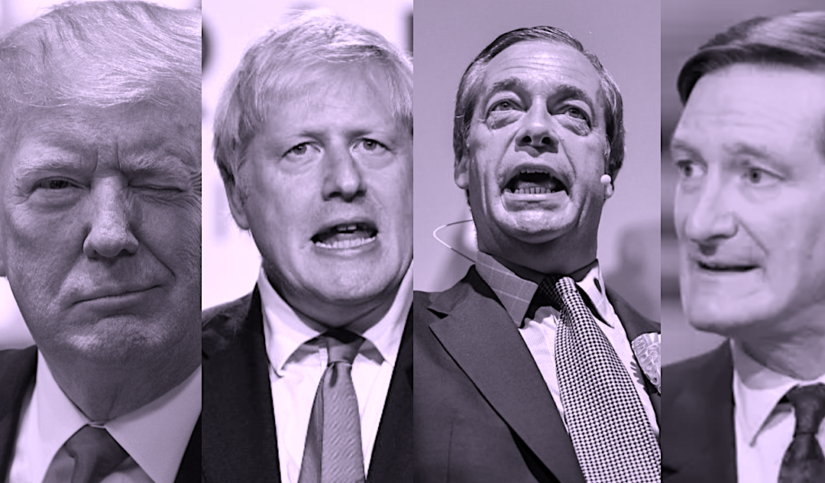 By TruePublica: The scandals erupting within No10 Downing street are seriously undermining any remaining confidence in the government. It doesn’t matter where you look – mutual respect, tolerance, the rule of law, liberty and democracy are now just thin veils covering the ugly truth of a government constantly overreaching its authority.

Today, Britain has a prime minister accused of misusing public funds for what appears to be little more than sexual favours. The police investigation into that incident has been conveniently ‘delayed’ until after the election. Quite rightly there has been a furious response from political opponents and the general public.

In addition, the police and Electoral Commission have recently announced more cases to bring against the very organisations that campaigned for Brexit – fronted by the Prime Minister. It should not be forgotten that senior Tory ministers and peers, past and present, have been caught red-handed in the Cambridge Analytica scandal that saw the theft and misuse of mass citizen data in a propaganda campaign designed to rig the outcome of a referendum.

In the meantime, the Electoral Commission itself has been swamped with complaints – and investigations have unearthed political campaigners accepting funds from impermissible donors and parties involved in false accounting, over-spending, illegal use of expenses and accepting illegal gifts.

Cash-for-donors was another scandal. American donors were paying a so-called think-tank to broker access to ministers who were either negotiating Brexit or very close to Brexit ministers to influence the outcome of a UK/US trade deal. They were caught on camera and the press barely blinked at this corruption of the highest office in the land.

Last week we learned that political opponents of Boris Johnson have been offered peerages and safe Conservative seats to stand down. In the last few days, we’ve now heard that the Brexit Party is compiling a dossier of complaints from its candidates of alleged inducements and bullying from senior Tories to persuade them to step down. This is tantamount to state-sponsored bribery, corruption and intimidation to sway the outcome of an election.

Then we have the new Brexit Withdrawal Agreement Bill, which has hidden in the depths of its small print – appendices that allows the prime minister nineteen new sets of powers that cannot be easily challenged by representative democracy. This alone amounts to a huge shift towards executive powers being granted to just one person.  If Boris Johnson wins this election and does push through that Bill, he will have more power than anyone in Britain (aside of two World War periods) has had for over 400 years.

After the Skripal poisonings in Salisbury, no less than 21 countries stood shoulder-to-shoulder with to Britain just six months ago in what was the worlds biggest expulsion of Russian spies. This was in response to what the government of the day saw as Russian aggression on British soil. And yet, they have been casually jettisoned for Johnson to realise his dream of power with another scandal involving large amounts of election funding found to be tainted with money emanating from the Kremlin.

For those rolling their eyes about Britain’s own ‘Russiagate’ – TruePublica has never endlessly harped on about Russian interference into Britain’s politics – but this is different.

This scandal of political malfeasance is potentially seismic. The Russia Report is serious and is consistent with accusations of abuse of office and power. The term ‘cover-up’ says it all.

We are all stuck in this trajectory. Malfeasance in office is becoming normalised as it has in America. Britain is being led down a very dark alley towards a stronger form of centralised power. This is not the statement of some rambling paranoid – this is already happening.

James Cusick at openDemocracy describes this latest incident of abuse of power:

“Downing Street acted “beyond the conventions of its authority” by demanding that specific names be removed from a report into Russian influence on UK politics by the parliamentary Intelligence and Security Committee (ISC), according to sources close to the committee.

The redactions are understood to have been ordered to protect London-based Russian oligarchs who are either leading donors to the Conservative Party or individuals regarded as friends of the prime minister, Boris Johnson. According to Whitehall sources close to the ISC, with detailed knowledge of how it operates, Number 10 or senior ministers can order the redaction of names only if publication is regarded a matter of national security.

One source said: “If it is simply politically inconvenient or embarrassing for Number 10 or the Conservative Party that individuals are named in a controversial report, that cannot be an official reason to issue an order that names be covered up. However if Downing Street does genuinely believe these names represent a security risk, then the importance of this report and the need for its immediate publication has just grown.”

The source added that Downing Street has acted “beyond the conventions of its authority”.

We are led to believe that the money involved in this case will be boosting the potency of the Tory election machine and comes from well-connected Russian oligarchs and companies involved in lobbying for Russian commercial interests. Those commercial interests are what exactly? We know gangsters such as arms dealers and money launderers feature in the ‘Russia Report’ – so it’s a fair question to ask to what end are they seeking for their investment in our prime minister? And even if they were not wanting a return – it’s the cover-up that’s important here. And there are so many of them going on, it makes you wonder what have we not yet heard about? And if we don’t believe a word of what MI5, MI6, the police and senior cyber-security officers say when it’s accusations are about the establishment and political elite, then we’ve lost all confidence in Britain – it’s time to pack a bag and abandon ship.

The result of this abuse of power is that this election has boiled down to what appears to be a fight between Boris Johnson, Vladimir Putin, the far-right, American religious extremists, Steve Bannon and the ultra-conservative free-market jihadists and the oligarchs on the one side – and European social democracy on the other. It’s the fight for a pivot – look left to Europe, look right to America. And what do we really have left? Deep-seated tribalism, division, a never-ending Brexit catch22 and an institutional spiral.

As a result of this abuse of power, this election has boiled down to what appears to be a fight between Boris Johnson, Vladimir Putin, the far-right, American religious extremists, Steve bannon and his ultra-conservatives and the oligarchs on the one side and European social democracy on the other.

This institutional spiral means dark money is now coursing through the veins of Britain’s democracy and what we have seen in real-time is a government that has done nothing but encourage it. The police and electoral commission appear to be more cautious, seemingly acting like they are being threatened and reluctant to act. The BBC has been accused of discarding rules of impartiality to become a propaganda mouthpiece for the hoodlums installed in Downing Street.

Boris Johnson took the opportunity of the Queen’s speech to use it as a conduit to illegally shut down parliament and then not mention a word of protecting Britain’s weakened democracy.

So what’s really happening here? The slogan ‘taking back control’ was never meant for the people – it was meant for them. They are a mix of Tory elites like Johnson and Rees-Mogg, American free-market fundamentalists, Russian orthodox ultra-conservatives and the increasingly more belligerent movement of the far-right. (read this article by Hope Not Hate – it’s scary)

They are pumping millions into their destabilisation of Europe plan – and it’s working, especially in Britain.